Should You Cover Microgreen Seeds? – A Test

Should You Cover Microgreen Seeds?

The general consensus among microgreen growers is to cover newly planted seeds either by placing another tray of microgreens on top or using some sort of cover to darken the planted seeds.

In this article, we present the results of an experiment we did using radish seeds.

The only difference is the way the seeds will be germinated. Below are the four methods used to grow the radish microgreen seeds.

These methods are shown in the photo below, respectfully left to right. 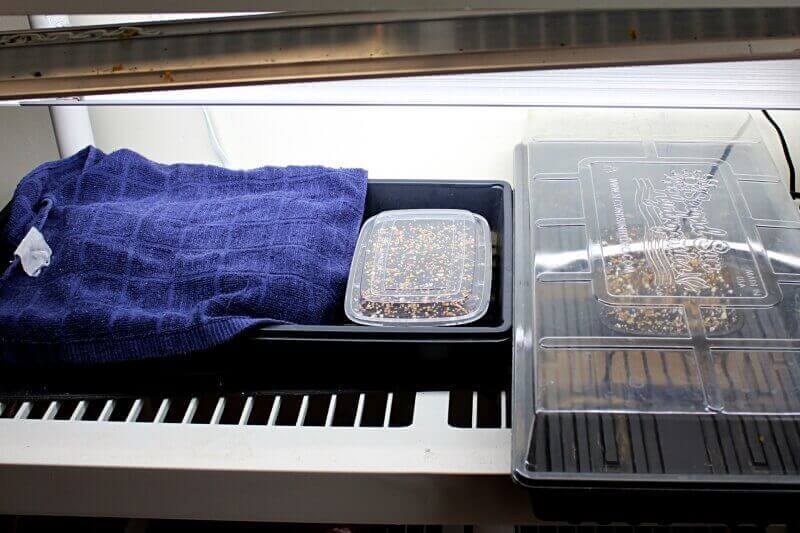 As mentioned previously, most experts cover microgreen seeds during germination. This is known as the blackout period.

We won't go into the details of the blackout period in this article. For more information click the button below.

Learn More About the Blackout Period

Get more information on the Blackout Period in this article.

Explanation of the Experiment

The purpose of this experiment is three-fold.

We will grow four trays of radish microgreens using the same size tray, same soil, the same amount of water, and the same mass of seeds.

Below is a video of how we plant microgreens seeds using the Home Microgreens trays. Also, we explain in more detail, the variables on how each tray is allowed to germinate.

The first of two trays where we cover microgreen seeds after planting.

After planting the radish seeds, this tray is covered with a lid tipped upside down, so the lid is in contact with the seeds, a weight is added, and then a tea towel is placed over the tray to keep the seeds in the dark.

Tray will be covered with a tea towel.

Seeds Blacked Out Without Weight

This tray will be covered with a tea towel like the control tray. However, the lid will be placed on the tray right-side up, providing an air space between the seeds and the lid.

The purpose is to see if it's necessary to add weight to the seeds. 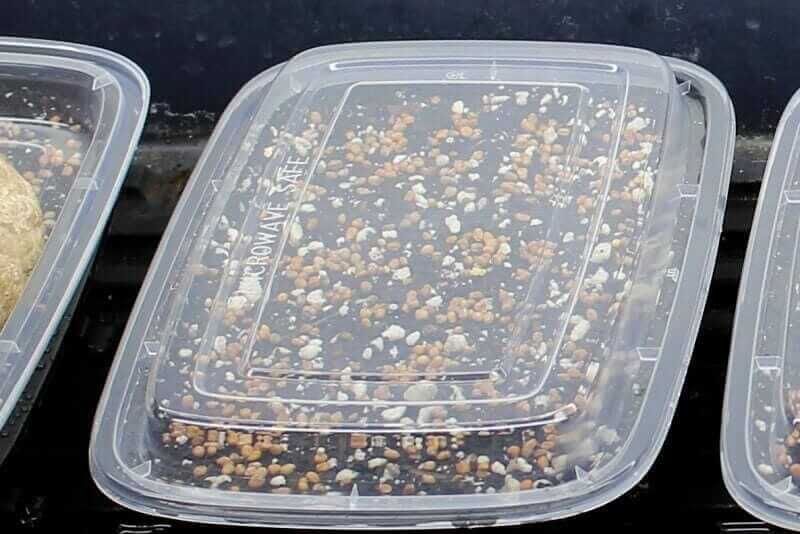 A tea towel will be placed over this tray.

This tray is the same as the last tray, but it will not be covered with a tea towel.

The purpose is to see how well radish microgreen seeds will germinate and grow when exposed to light. The cover will help retain moisture. 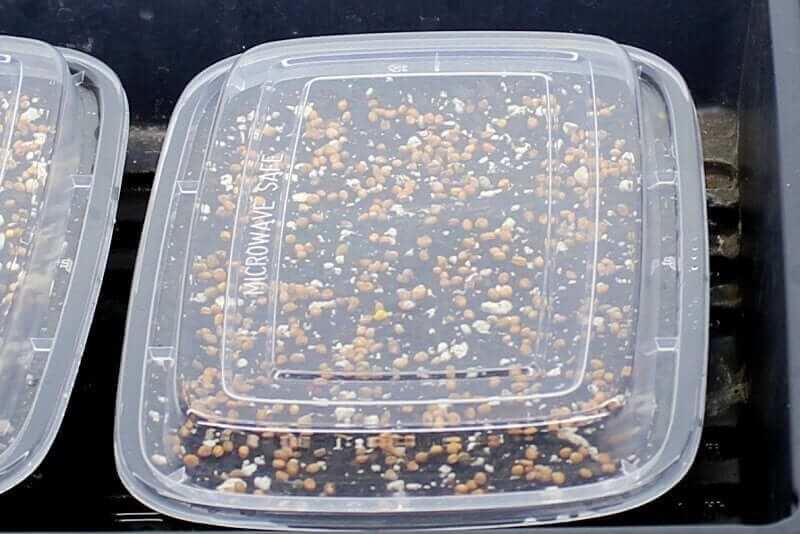 These radish microgreen seeds will be exposed to light.

This tray is placed in a larger tray (10 by 20) with a high dome transparent cover and the seeds exposed to the light.

The purpose is to see how well radish microgreen seeds will germinate and grow with lots of air space while being exposed to light. The cover is used to help retain moisture since the seeds are on the surface and not covered with soil. 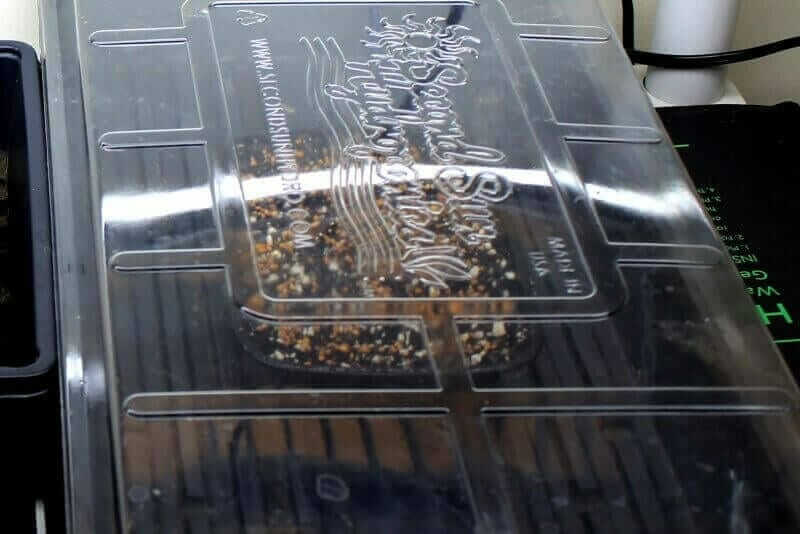 The reason we used radish seeds is that they germinate and grow quickly. In fact, radish microgreens can be ready in as soon as seven days.

The sequence of photos below is of the radish microgreen trays with the elapsed time shown in the heading.

You can expand the photos by clicking on them to get a better view.

I believe the photos will show you the results.

Three of the four seeded radish trays are shown (three fit into the photo better) below. 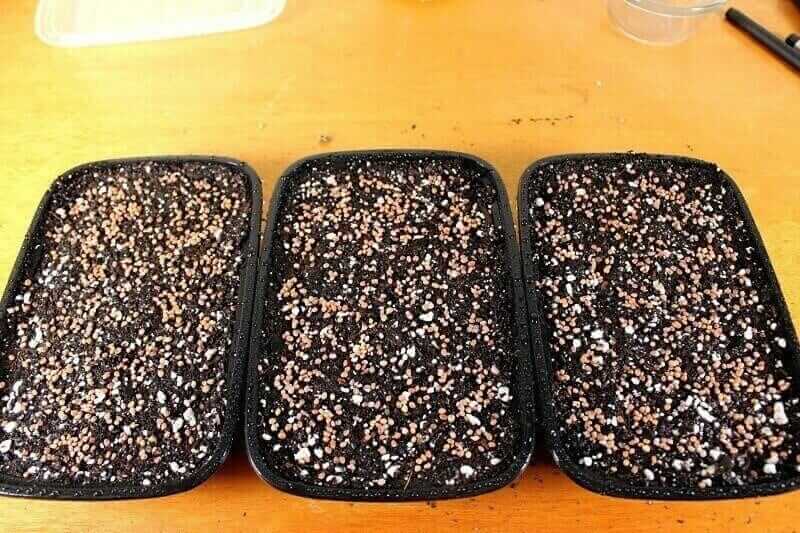 Radish seeds sown on a 37.5 square-inch tray. Notice uniformity of seeding between trays.

All four trays were left untouched for 48-hours. This is how we handle all freshly planted microgreen seeds.

On the second day, even if we know the seeds might not germinate until day three or four, we check the seed and soil to make sure the moisture content is okay.

Radishes, however, usually germinate after only 24-hours. But we still wait until the second day before disturbing them.

The white you see around the seeds is root hairs and not mold or fungus.

All trays are returned to their respective positions after the photos are taken.

Below are photos of each of the four test trays. The captions contain a description of the progress. Click image to expand the viewing area. 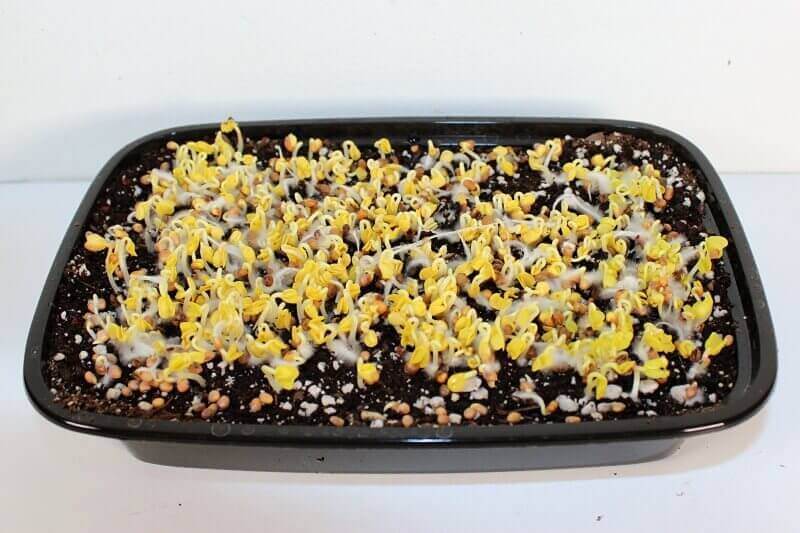 Great germination on this tray of radishes. Yellow color is because they were covered and received no light. 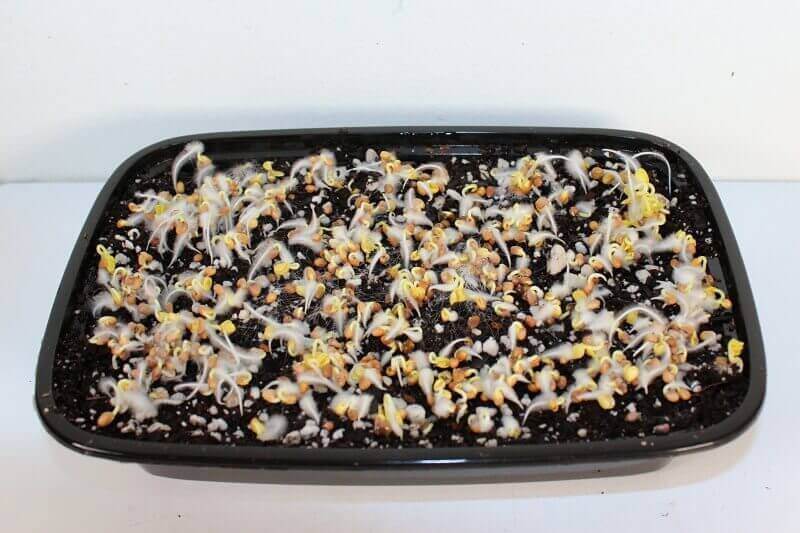 Germination is okay, but not as good as the weighted tray. Again, yellow color is from lack of light. 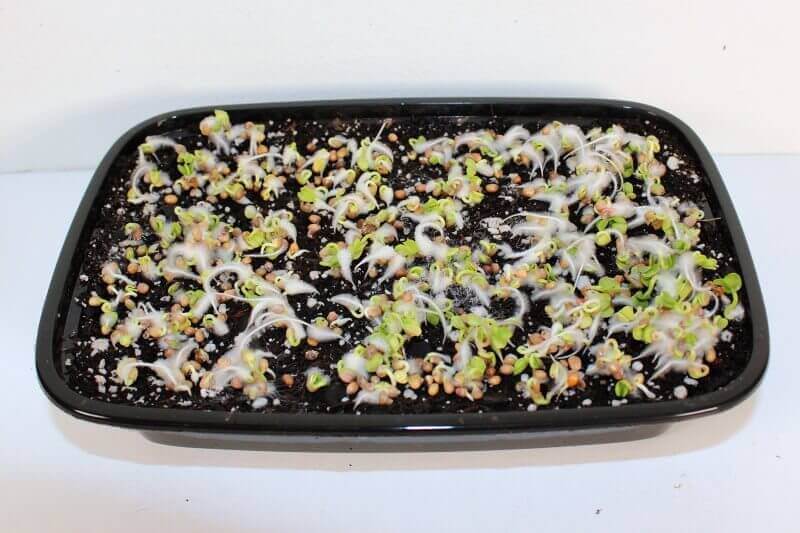 Germination is okay, growth is uneven across the tray, some radishes are growing upwards, others sideways. You can see how these are greener than the previous two trays due to access to light.

Very little germination and growth. Notice how the soil along the edges is dry. More air circulation removes moisture from soil.

In the images below, you can see that the trays not exposed to light grew quite a bit in the last 24-hour period. Those under light didn't grow as much.

After the photos, all of the trays are exposed to light. The lights are on timers set for 14-hours.

This is the advantage of using a coco coir based planting mix. Overwatering is almost impossible if they're able to drain.

The last 24-hour period has amplified the differences between the four methods. Again, the white is root hairs and not a fungus.

Even though these seeds were grown in the dark and with a heavy weight pushing down on them, they have the best germination and growth of the four methods.

The yellow color is due to being grown in the dark.

Covered with No Weight Added

Not quite as good germination or growth as the weighted tray. Notice that more of the root hairs are growing above the soil line.

Without the weight, the roots have no incentive to grow down to anchor the plants. They have enough energy in the cotyledons and moisture on top of the soil. They have no need to anchor themselves and push up through the weight.

This tray is very similar to the tray grown under the blackout without weight added. The exception is that the plants are green and full of chloroplasts.

The plants are also growing on or near the surface of the soil. They're not well anchored at all and are growing along the surface.

This tray has poor germination. Most likely because the larger air space allowed the seeds to dry out. Maybe a bowl of water added to the tray would help, but probably not enough to make a significant difference.

All four trays are now placed under LED lights for 14-hours per day.

Below are photos of each of the four test trays. The captions contain a description of the progress. Click image to expand the viewing area. 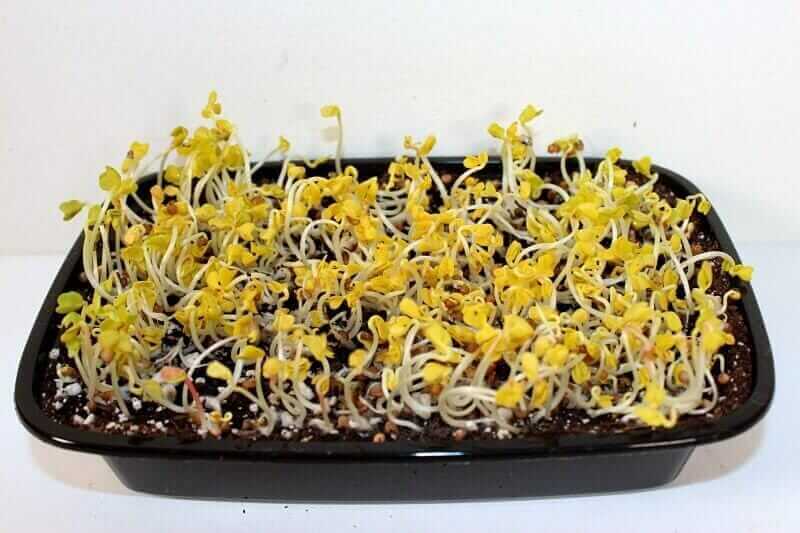 Even though these radish microgreens have been covered with a heavy weight on them they have the best germination and growth of the four methods. 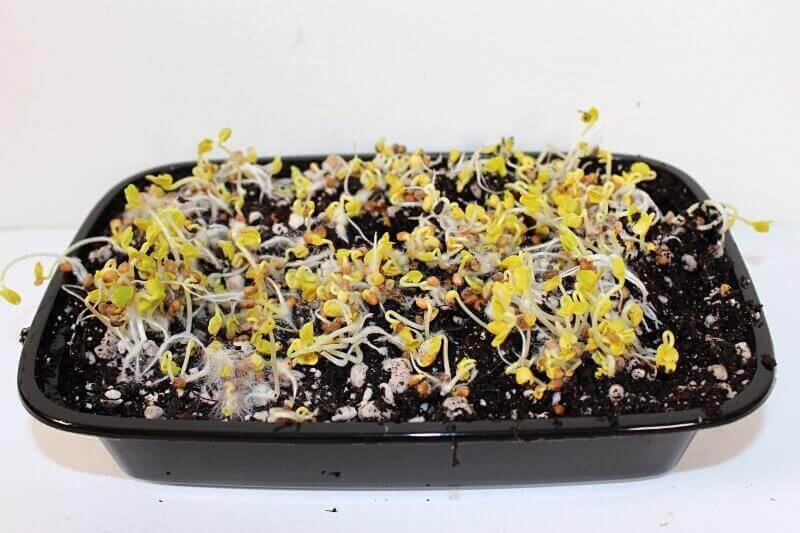 Less growth here than the covered and weighted tray. Also, the plants aren't well anchored into the soil. Many are growing just above or in the loose top surface of the soil. 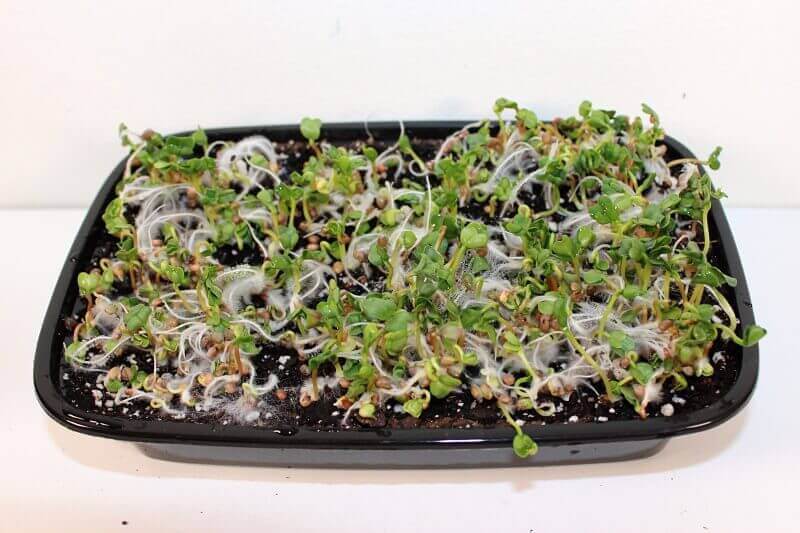 Grown in light, these radish microgreens are green compared to those in the blackout. However, without weight on top of them, they are very loosely rooted in the soil. 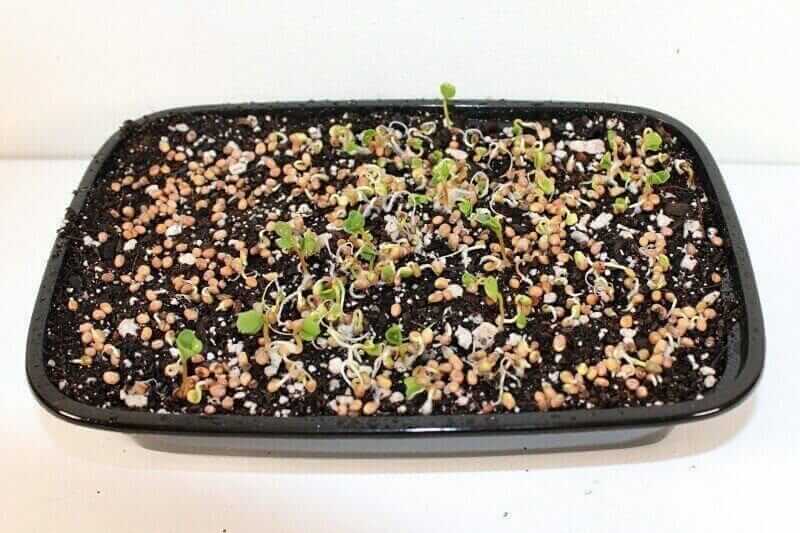 Grown basically in the open, these seeds are well behind the other three trays. Lack of moisture is most likely the cause for poor germination.

In the photo below, you can see how the roots of tray 3 are growing mostly out of the soil. Tray 2 is about the same, except the plants aren't as green. 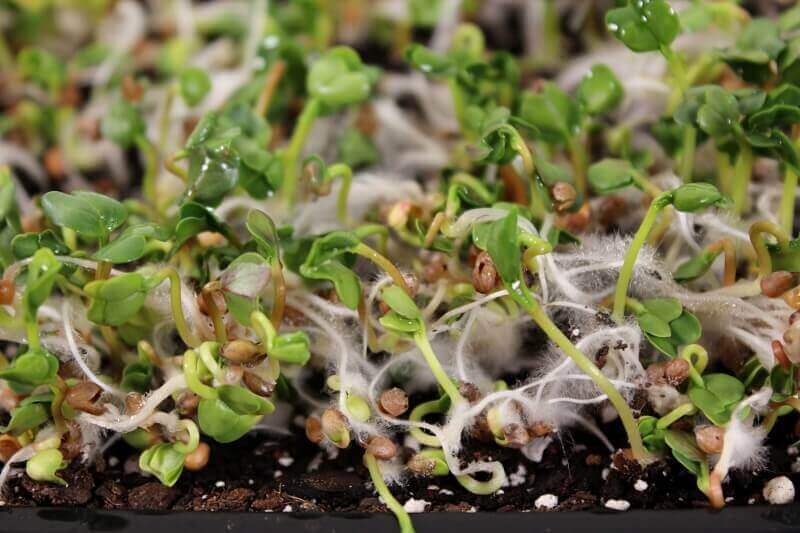 Without weight on top of the seeds, there is little incentive for the roots to anchor into the soil.

We've seen all we need to see to make a choice on which method is best. It's evident in the photo below that the radish microgreens grown under a full blackout period (covered & weighted) have grown the best.

The last tray didn't have good germination because the large air space did not keep moisture around the seeds.

The two middle trays are very similar, both had reasonably good germination, but because the roots did not anchor into the soil, many plants didn't get enough moisture from bottom watering and died due to lack of water.

Now, they could be watered from the top, but then you increase the risk of fungus growth.

Below are photos of each of the four test trays. The trays are in order for how they are explained in the article from left to right. 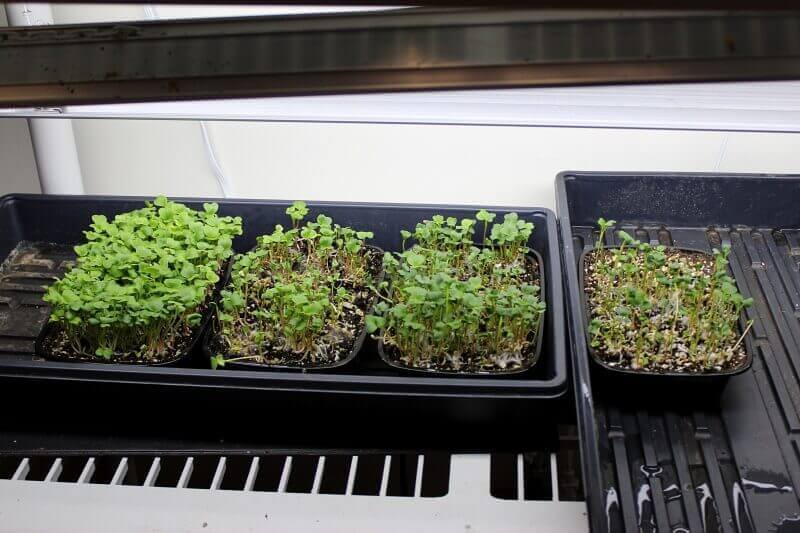 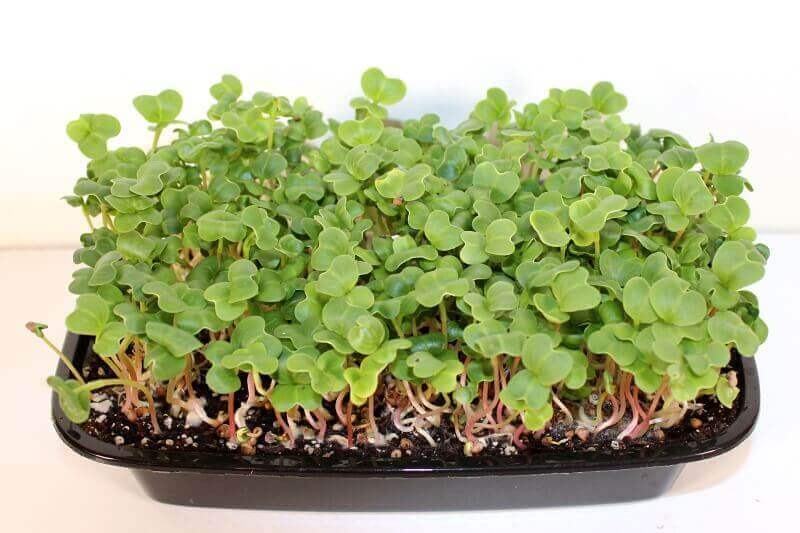 These radish microgreens were placed in a full blackout period, excluding light and adding a heavy weight on top of the seeds. By far the best tray of microgreens. 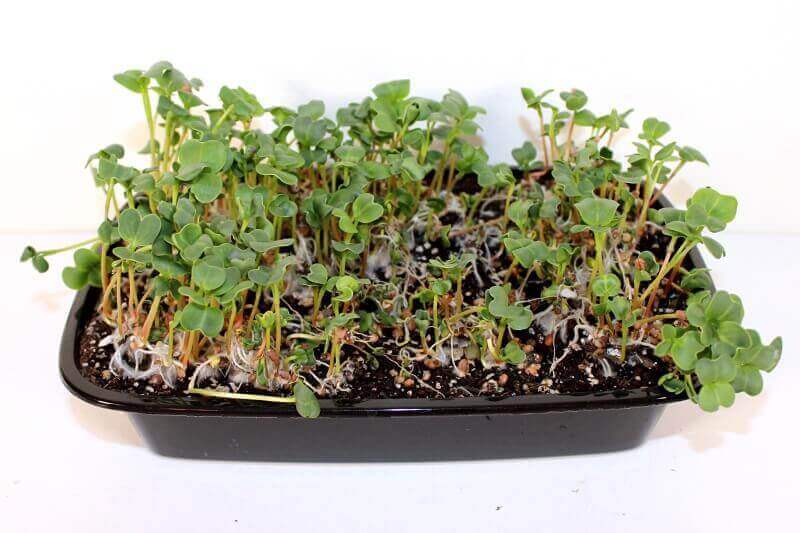 These radishes were covered to exclude light, but no weight was added to the top. The roots did not anchor well into the soil. You can see many roots above the soil surface.

As you can see, it's best to cover microgreen seeds to exclude light and add weight to the top of the seeds so they're pressed down into the soil.

As you saw in the photo series, microgreen seeds grown in the dark germinate the best.

Weight added to the top of the tray forces the roots to grow into the soil and anchor the plant.

The weight also helps retain or trap moisture between the cover the and soil helping the seeds to germinate. This may be the reason why there is more consistent germination using this method.

The pictures tell the story, at least for radish microgreen seeds.

However, after growing almost 30 different varieties of microgreens, it appears that germination in darkness and under weight is preferred for most microgreen seeds.

No internet dogma here, the microgreen growers are correct when they recommend you to stack up several microgreen trays. The darkness and weight produces better quality microgreens.

What is Your Experience?

How do you start your microgreens? Do you use another method?

Leave a comment below, we'd love to hear about your success!

If you have any questions about the information in this post or microgreens in general, please leave a comment below or reach out to me using the Ask a Question page. 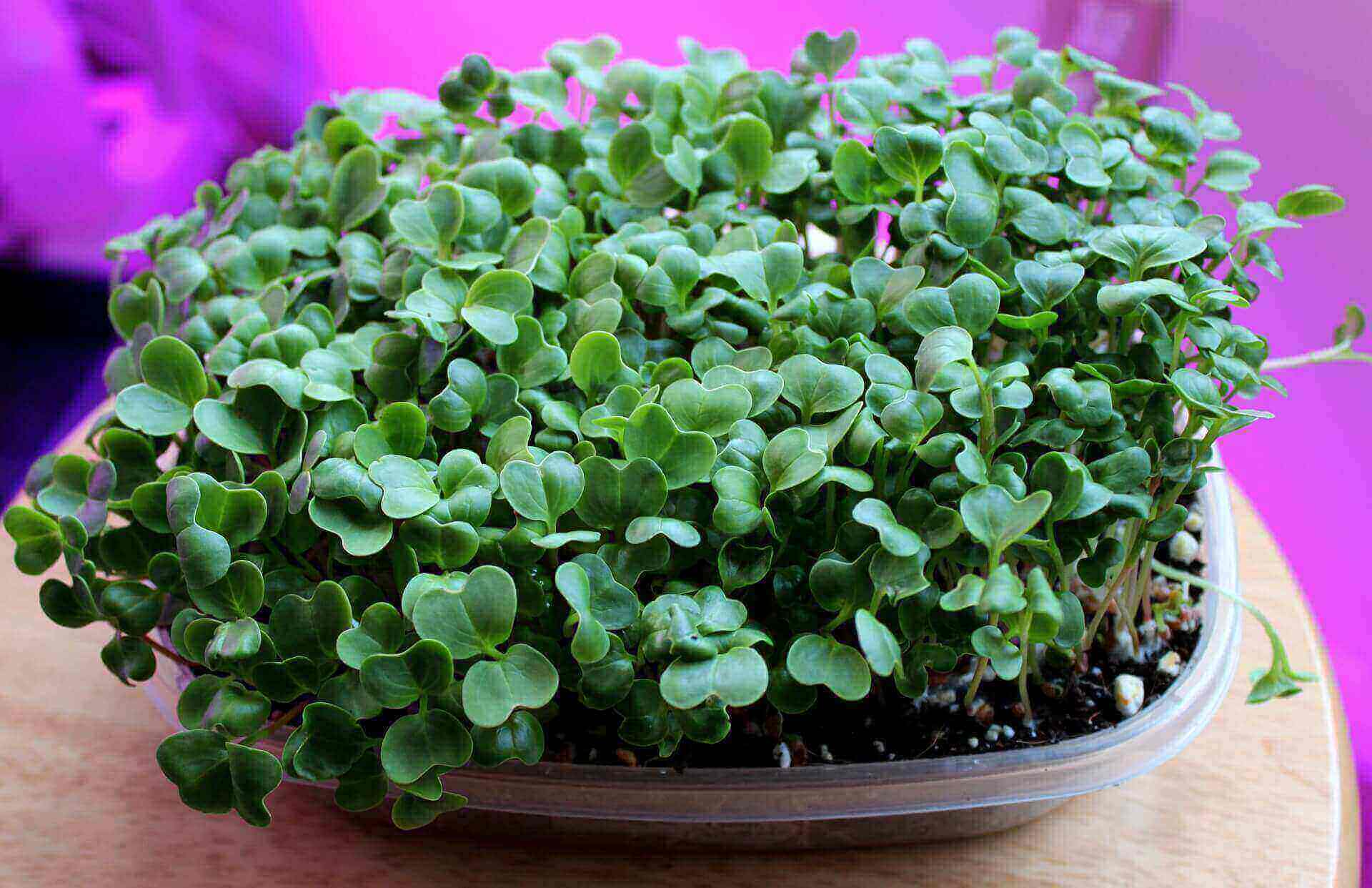 Radish microgreens are very popular with foodies and home microgreen growers.There are END_OF_DOCUMENT_TOKEN_TO_BE_REPLACED 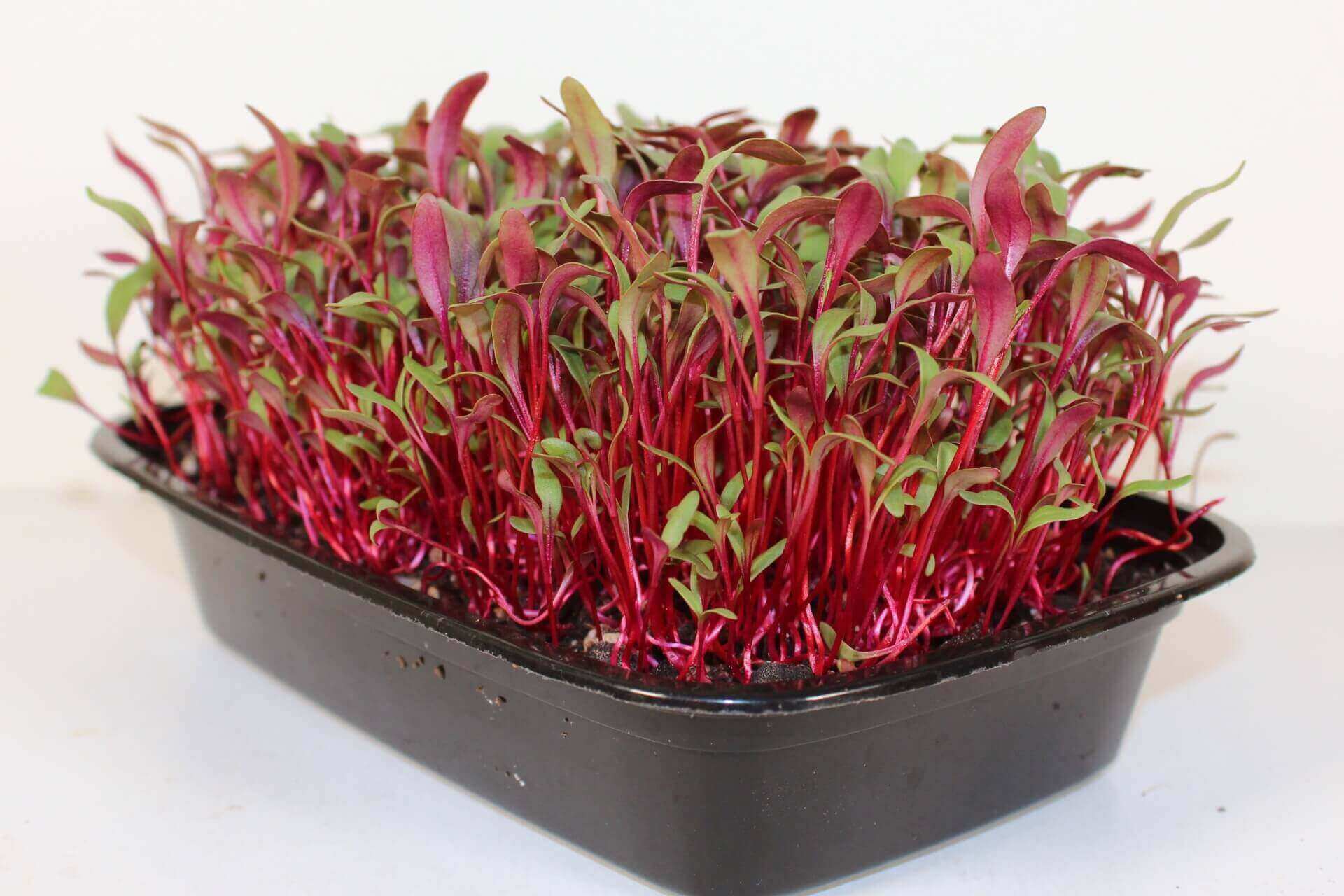 We love Bull's Blood beet microgreens. Look at the color of those END_OF_DOCUMENT_TOKEN_TO_BE_REPLACED

Which Microgreen Soil Is Best For Slow-growing Microgreens?

Which Microgreen Soil is Best -Part 2In the previous article, The Best END_OF_DOCUMENT_TOKEN_TO_BE_REPLACED

The Best Soil for Microgreens

Soil for Microgreens - Which Media is the Best?In a previous article, END_OF_DOCUMENT_TOKEN_TO_BE_REPLACED 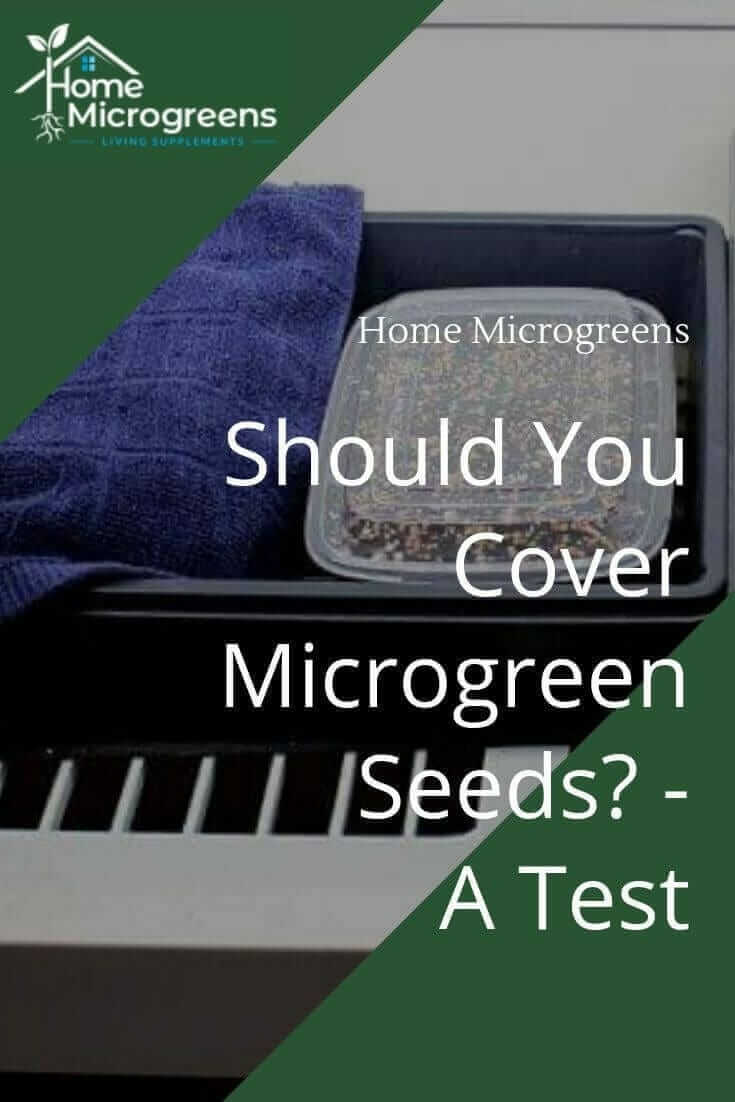 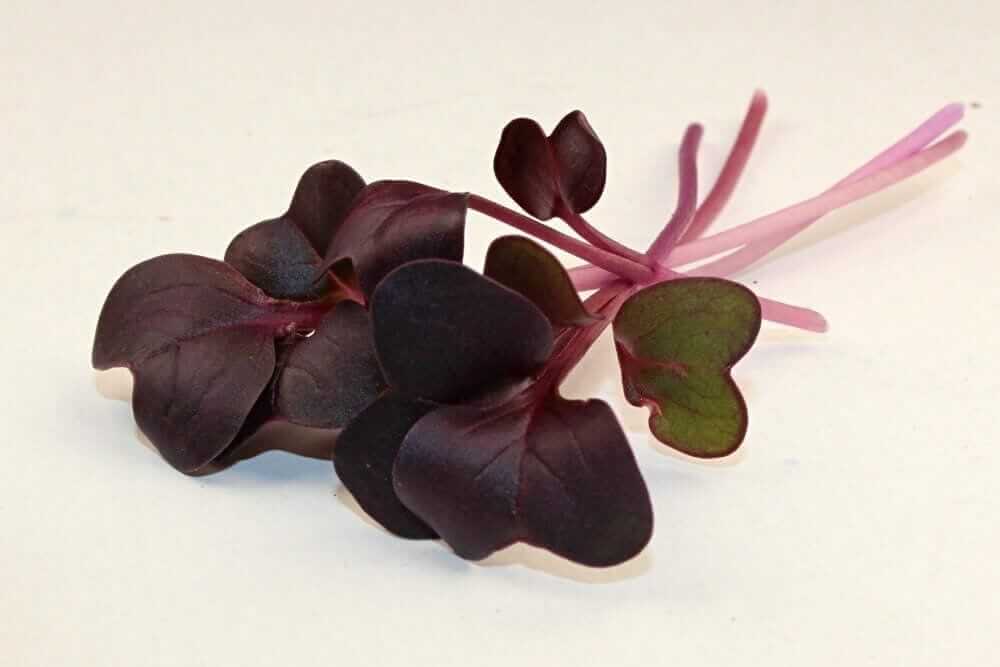 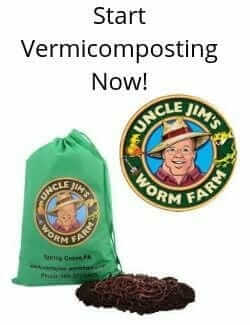 We compost all of our microgreen soil with worms! Visit GardenPermaculture.com to see how. It's easy!

Triton & Rambo radish microgreens, these are my fa

Radishes out under the lights available for local

On going soil test with a national brand coir base

@ridgedale_farm thanks for signing it! Received i

Red Cabbage is one of my favorite microgreens to g 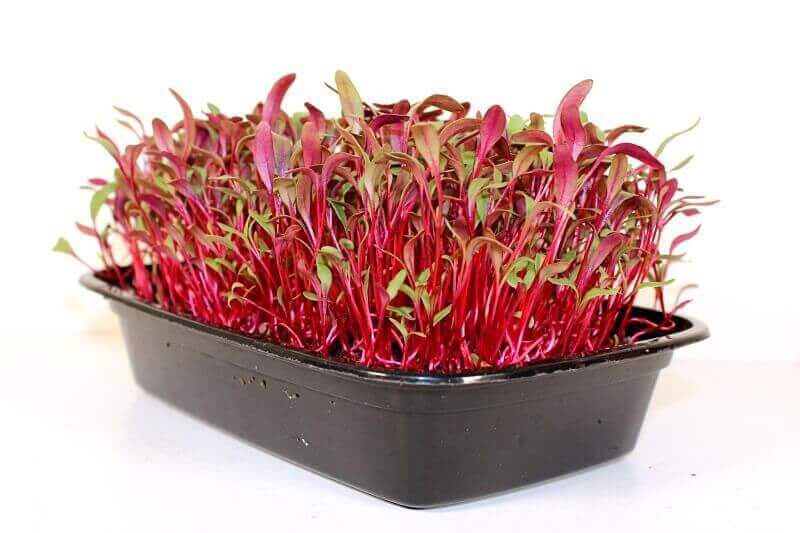 ​Learn How to Grow Microgreens

Download the one-page chart by entering your information to the right. 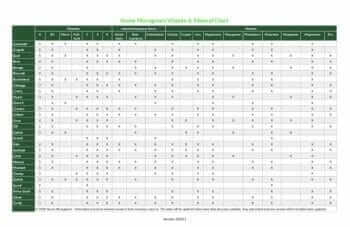 Tell Us Where to Send your Free Microgreen Vitamin & Mineral Chart:

Don't miss an article. Sign-up below to have new article notifications sent to your inbox.