What Is Coco Coir? 7 Reasons We Love It Plus a Few Dislikes

Obviously microgreens placed under a light source grow more vigorous than without light.

Also, for an environmentally conscious home owner using LED lights are a no brainer. Especially when growing non-fruiting short-term vegetative crops like microgreens.

However, is it necessary to use LED grow lights instead of say less expensive (per area lit) LED shop lights?

Will the growth, production, and plant vigor be much different using LED grow lights instead of LED shop lights?

We set up a test and the results are presented below.

Let's take a look at the lights we tested to answer the question stated above.

Remember, we aren't comparing commercial lighting systems here, this is for the home microgreen grower.

This is the first of a two-part LED light comparison series. You can read the second article by clicking this link. In fact, there may be up to four articles on this subject. You can sign-up to receive updates using the form below.

All Articles On Microgreen Lights 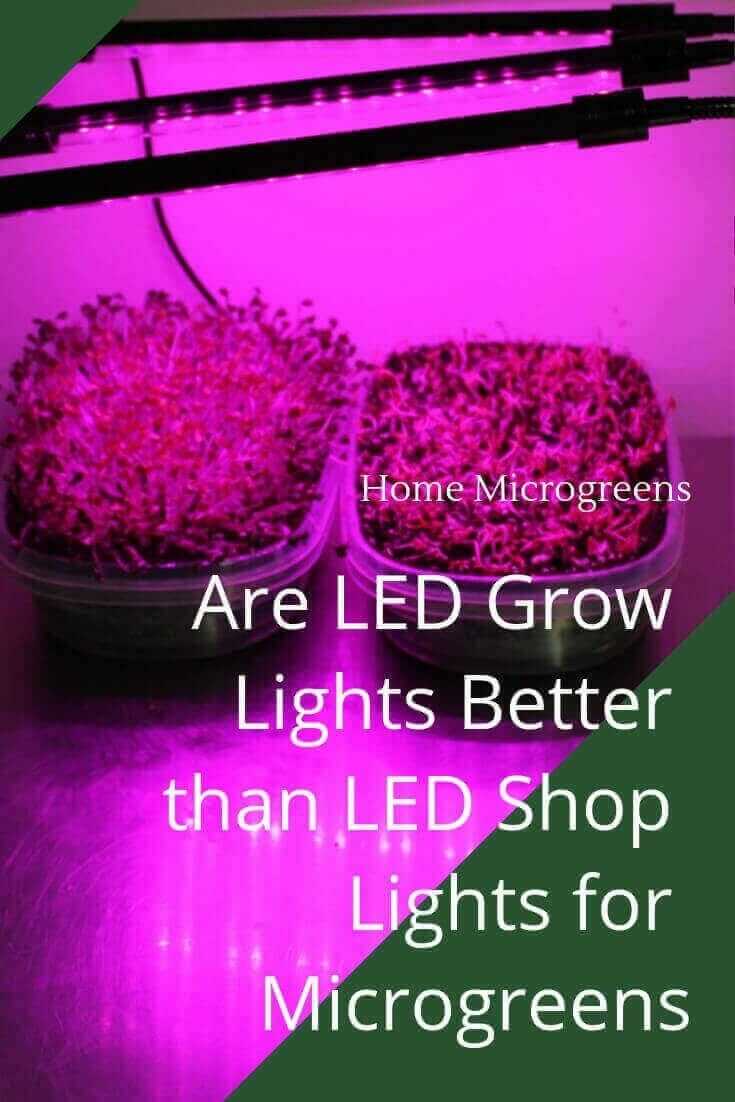 First the LED grow light is from Amconsure (click any photo to see a larger version when on a computer). A future post will explain grow lights in more detail.

There are a few reasons this grow light was purchased. 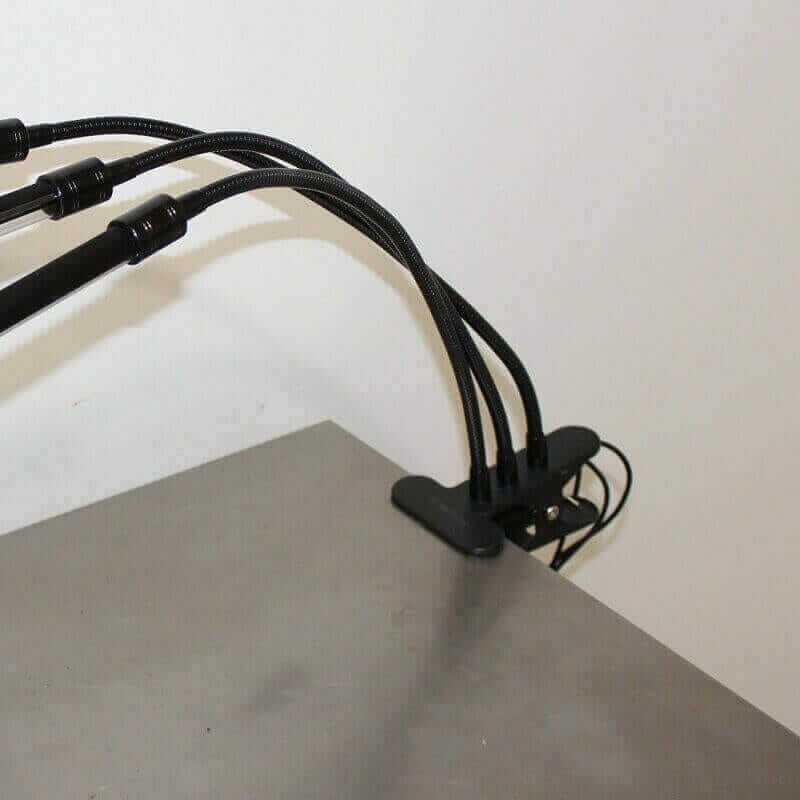 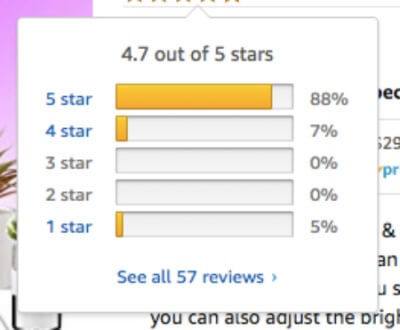 The LED shop lights are installed on a shelving unit that I use to grow microgreens and other indoor garden plants. Two light bars are installed.

The lights are Commercial Electric LED Strip Shop Lights, which can be purchased at Home Depot. Each light is equivalent to a 25-watt fluorescent light bulb.

Since the shelving unit is a 3-feet wide, the LED shop lights are 3-foot in length (they also come in 2- and 4-foot lengths). The lights produce 1350 lumens, which is difficult to describe but think of it as visible light brightness; and they are in the 4,000 Kelvin range, which places them in the neutral white color temperature for light. 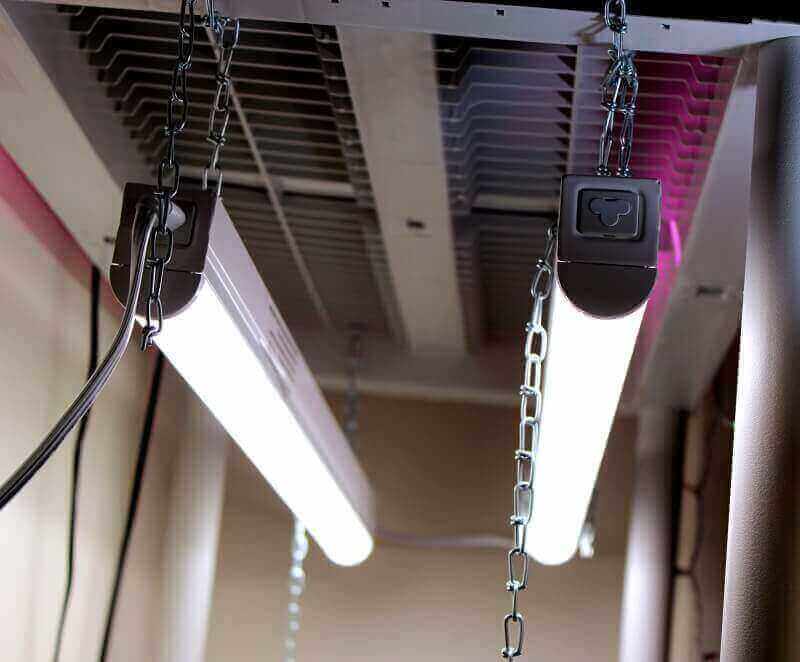 These shop lights are nothing special, they just fit the bill at the time for size, price, and availability. However, I've grown microgreens and other plants under them successfully for over a year now.

Here's the new LED light I use. Instead of using two lights to light up a shelve, one of the new lights does the job! The light also comes with hangers that connect to the shelve with zip ties. The light is sold at Home Depot for only around $15.

The two bars of LED shop lights are mounted under a plastic 5-shelf storage rack in a corner of my living room. The shelf can receive some sunlight from a bank of southeast facing windows. However, Syracuse receives few hours of sunlight in late December.

The LED grow lights are mounted on a stainless steel kitchen table using the attached clamp. The kitchen has no windows and receives no natural sunlight. There's a fluorescent light fixture and LED overhead light in the kitchen as well. These lights are only on when food is prepared, so about an hour or two a day.

The reason for placing the LED grow light in such a naturally dark room is to test if the LED light can grow microgreens in such conditions. Many home owners and apartment dwellers may not have a sunny place available to grow microgreens. If the light works it's an inexpensive solution for that problem.

This test is far from scientific. That said, comparing grow rates, leaf development, and total mass of microgreen growth between the two light systems still should make some conclusive results.

Such as, are inexpensive grow lights worth the small investment; and, can microgreens be grown in a naturally dark room with Amconsure LED grow lights? The LED shop lights have produced trays and trays of microgreens, I know they work.

But maybe the LED grow lights are that much better.

However, there are some differences in locations and lighting.

At the start, I expect the microgreens under the shop lights will germinate and grow quicker because of the warmer temperatures and more natural light.

However, I expect the microgreens under the grow lights to be less leggy and more compact.

Because of the microgreen varieties grown (see below) I expect the shop lights to produce more mass. 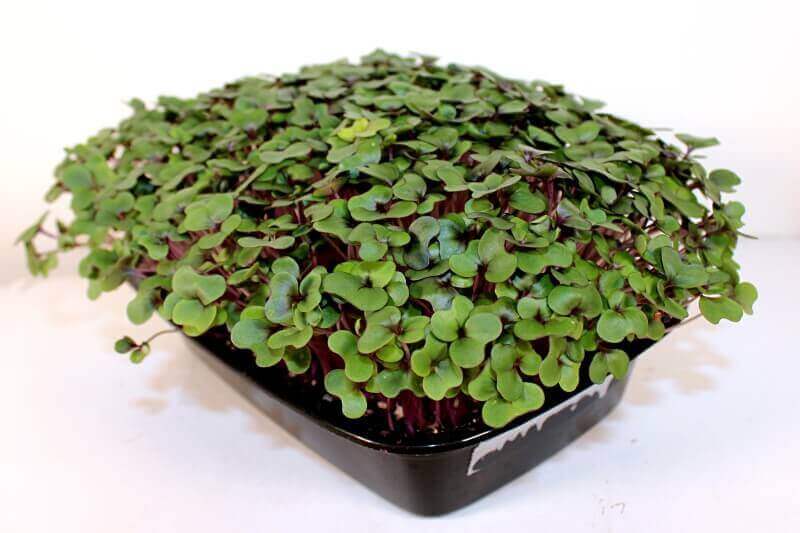 Grow Your Own Microgreens

Microgreens are easy & quick to grow!

What Microgreens Were Tested?

For this part of the experiment, I choose two reddish leaf microgreens, Red Acre Cabbage and Bull's Blood Beets.

The reason for the reddish leaves is to see how well they do under the red and blue grow lights.

Grow lights use light wavelengths in the red and blue spectrum, hence the purple color, because most plants are green, meaning they reflect instead of absorbing and using green light for photosynthesis.

Curiosity made me wonder if the reddish cabbage and beets would grow well under the red lights. I will also test green leaf microgreens under both lights and post the results in another article.

Equal amounts of each seed is spread evenly on 40 square-inches of a professional potting mix. The seeds are covered and kept in the dark until they germinate, then they're exposed to the light.

The microgreens are watered from the bottom. A timer on the shop lights is set a daily 12-hour period and the 12-hour daily setting is used on the LED grow lights.

Let's compare the growth difference between the LED shop light and Amconsure LED grow light in a series of photos. 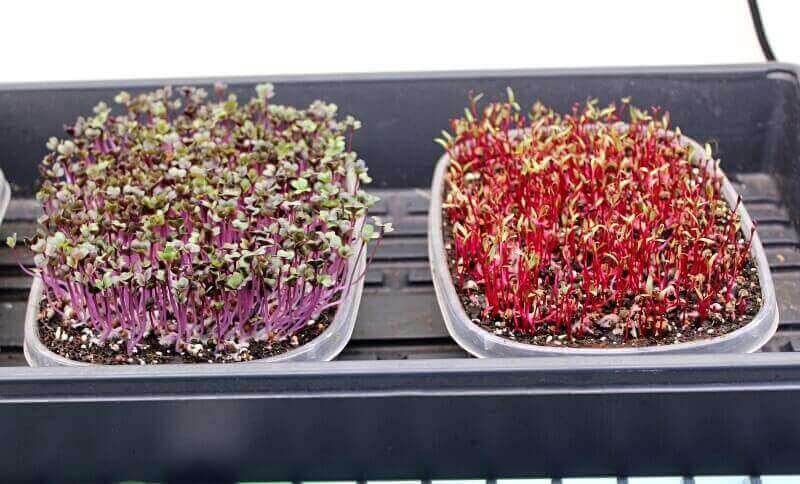 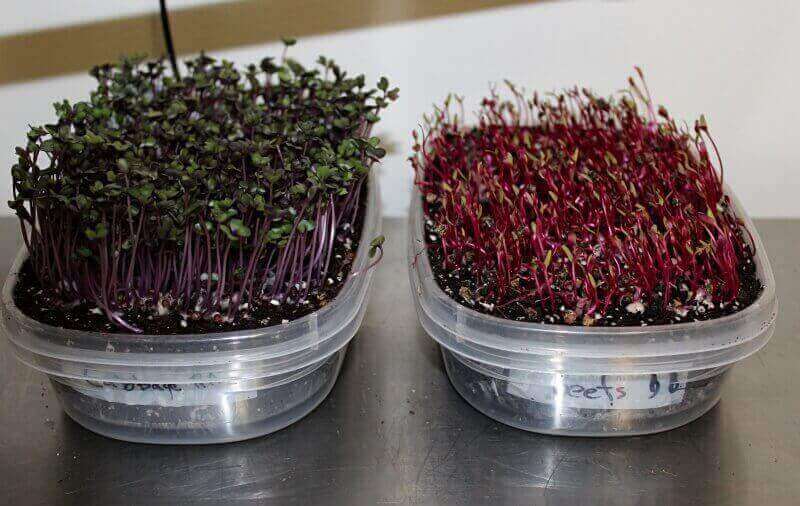 Even though it's hard to tell, the growth on both the cabbage (left tray in both images) and beets is very even. 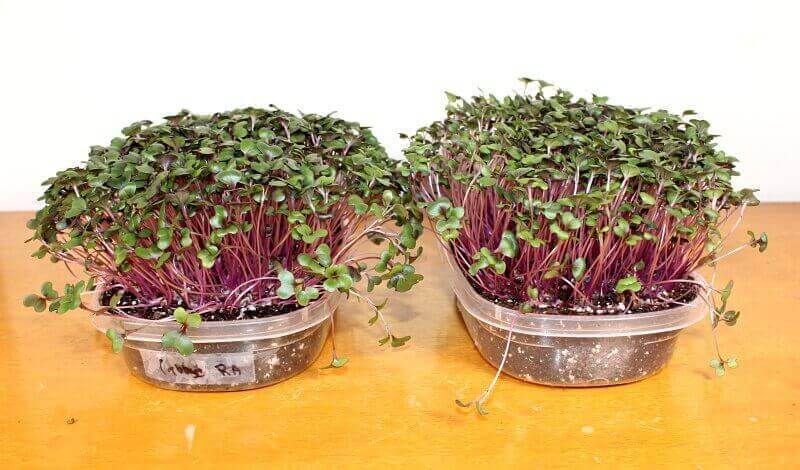 The image above shows the Red Acre Cabbage trays on day 9. They are very equal in height, the LED shop light cabbage (the one on the left) is fuller and though you can't see it in the photo very well, the leaves are larger and a bit more shiny.

A good way to compare how well the microgreens grow is to harvest them and weigh the mass of useable green.

The difference is about 3%, not much of a difference. Especially considering that the shop light microgreens were in a warmer room plus they had a bit of indirect natural light.

Below is a video showing the harvesting of the Red Acre Cabbage. 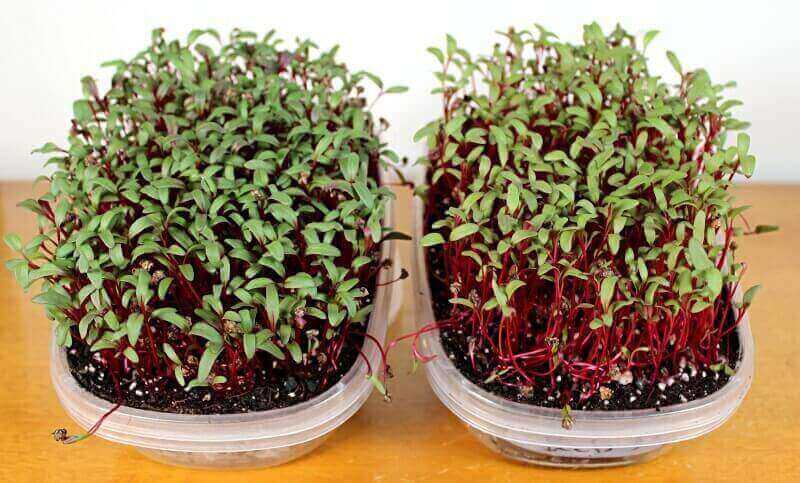 With the beets, the growth is different. The shop lights produce a darker leaf and the plants grow shorter but wider. It's not that the germination is different, rather, the plants are more broad with larger leaves.

The tray to the right, is grown under the LED grow light and the plants are much more leggy. I believe the redder leaves of the Bull's Blood Beets restrict the growth under the grow lights.

Day 16 is harvest day. Below are both trays of beets, those grown under LED shop lights to the left, and the Amconsure LED grow light on the right. 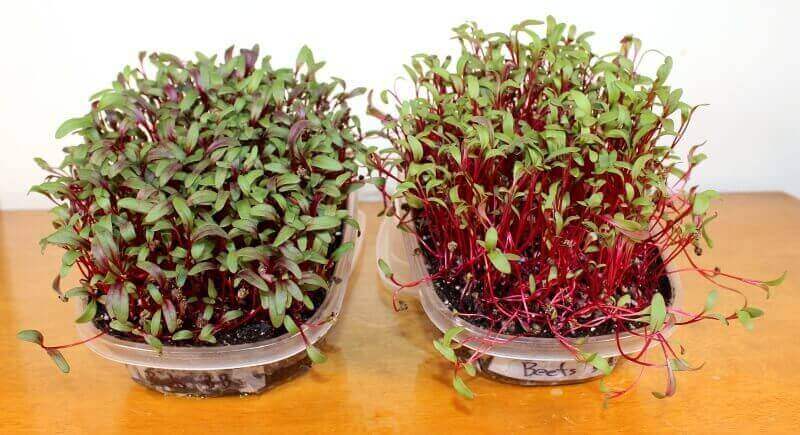 As you can see, the beets grown under the shop lights are uniform, dense, and have great color. The microgreen beets on the right are leggy, straggly, lighter green, and smaller leaf size.

The legginess of the LED grow lights surprised me. I expected them to be more compact. Maybe the light is not intense enough for the red-leaf microgreens?

As with the cabbage, both trays where harvested and the useable greens weighted.

That is almost a 25% difference. Even though the shop light microgreens could've had better growing conditions than the grow lights. A production decrease of 25% is more than can be explained by indirect natural light and a few degrees more warmth.

What is Better for Microgreens, LED Shop Lights or Grow Lights?

It would appear that the LED shop lights are a better choice. At least for the varieties of microgreens grown in this experiment.

Quicker growing microgreens such as the Red Acre Cabbage didn't show much difference in harvest mass, about 3%. And though the leaves looked better grown under the shop lights both were very healthy.

Microgreens that require longer growing time, such as the Bull's Blood Beets (16-days), it appears that the LED shop lights are better. At least for microgreens that have reddish tint leaves.

However, I'm not giving up on the Amconsure LED grow light just yet. Here are the reasons.

To see if the red-tinted leaves are a reason for the poor performance of the LED grow light, four more trays of microgreens will be sown.

Two trays of a fast growing green microgreen like mustard or broccoli and a slower developing microgreen like basil. A tray of each will be placed under both types of lights and the growth will be compared.

The above mentioned test was completed a couple of weeks later. The article can be read by clicking the link below.

LED Grow Lights for Microgreens, Do They Work?

If you don't want to miss new articles, enter your information below to receive updates.

Click the Amazon ad to the right (below on phone) to take a closer look at the Amconsure Grow Light.

The light does have some nice features, and even though it might not be the best grow light option, most likely has some features that will benefit you.

It easily grew two small trays of microgreens right on my kitchen table. I believe it could manage up to four trays at one time.

If you have any questions about the information in this post or microgreens in general please leave a comment below or reach out to me using the Ask a Question page.

Episode 007 – My 4 Most Frequently Asked Questions About Microgreens