The 6 Benefits of Using Split Cilantro Seeds for Microgreens

What are split cilantro seeds?

More appropriately, we should ask what are split coriander seeds?

Because the seeds we use to grow cilantro microgreens are actually called coriander seeds. More on this later.

When the coriander pods are processed, they often break apart. So spilt seed is actually a by-product of harvesting or packaging of whole coriander seed pods. 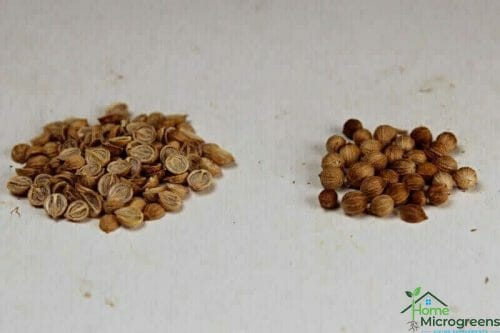 Listen to the Related Podcast!

Which is it, Cilantro or Coriander?

That's a matter of opinion. It depends on where you live and if you're using the herb or the seed.

I understand that the UK prefers coriander as it comes from the French word coriandre' for the herb, while in the States, we use the Spanish word for the herb cilantro.

The spice (the seed pod) is called coriander, though. Confusing for sure.

But moving forward, in this article, we're going to call it cilantro seed or split cilantro seed, because we are using the seeds to grow cilantro microgreens and this is a U.S. based website.

What Are the Benefits to Using Split Cilantro Seeds?

The benefits or advantages of spilt cilantro seeds will be presented below in the images of both the whole and split seed being grown.

We will show you a series of photos where we grew two trays of cilantro, one using whole cilantro seeds and the other using split cilantro seeds.

There can be some objections to this test, but in the end, we'll summarize the experiment and hopefully overcome your doubts.

We have published several other articles on how to grow cilantro. Links to those articles can be found in the box below.

How to Grow Cilantro Microgreens

The Benefits of Using Spilt Cilantro Seeds for Microgreens 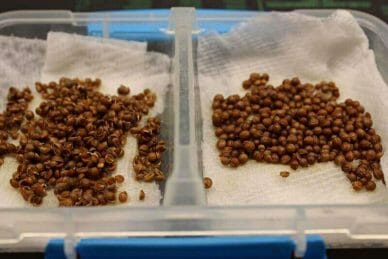 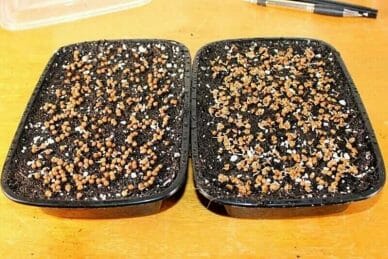 The cilantro seeds have been soaked, sanitized with hydrogen peroxide, and pre-germinated for 3-days before planting.

If you read my article Growing Cilantro From Seed - to Soak or Not to Soak the Seed, you know that the results were not conclusive to which method is better. So my recommendation is to not soak the seed as it's just a wasted step.

So Why Did We Soak & Sanitize The Seed?

We soaked and sanitized the seeds for two reasons.

Obviously, the grooves and such do a better job of either holding the fungus spores or holding more water and creating a better environment for the fungus to grow.

Soaking the seeds lets the spores develop, and then rinsing with a 3% solution of food-grade hydrogen peroxide will kill the fungus.

Second, we tested if pre-germinating the cilantro seeds works better than dry sowing and soaking the seed. A commercial grower uses the pre-germination method, and we wanted to try it. We were killing two birds with one stone.

If you're interested in the pre-germination test, let me know, and we'll publish the results.

When we plant Home Microgreens Trays for demonstrations or 1020 trays of cilantro to sell cut microgreens, we recommend dry seeding the trays.

The only exception would be a bad batch of seeds that consistently grows fungus. It happens. 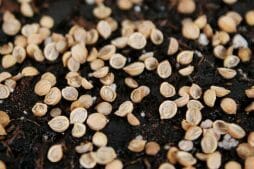 What Soaking Did Show Us

As you saw in the photo, the split cilantro seeds did germinate quicker than the whole seeds. The soaking process did reveal an advantage of split seed over whole seed.

The trays were not stacked on top of each other to keep the weight equal on both trays.

After 4-days in the Blackout

We stopped the blackout period after 4-days. The trays are shown below.

As you can see, the split cilantro seeds have germinated better and are growing much quicker than the whole seed.

Below are the same trays after 2-days under the lights.

Same trays as above, 2-days under lights.

The plants are also more erect, the leaves are larger, and the photosynthesis rate is more significant, as you can see from the much greener plants.

Fifteen days after planting the pre-germinated split cilantro seeds, the tray could be harvested.

The cilantro grown from the whole seed is looking better, growing fine, and as dense as the tray grown from the split seed; but, still two or three days behind.

There's nothing wrong or bad about either tray of cilantro microgreens.

As you can see, the tray on the right grown from split cilantro seeds is taller, has filled out more, and the true leaves are bigger.  The microgreens in the middle of the tray are starting to push those on the outside over the edge.

The Pink Elephant in the Room

Even though we didn't mention it, it's apparent that we didn't take the same seed lot of whole seeds and split them to make the split cilantro seed.

Of course, there could be a difference in germination rates and even genetic variability in the seeds to make the differences shown in this test.

But, I'd like to point out that both seeds came from the same supplier packaged for sale during the same year. The lot number is different. And we didn't reach out to ask any other specifics on the seeds. The difference in the lot numbers could be just a matter than one package contains whole seed, and the other is split seed.

However, since both trays of seeds grew great, and the trays' visual difference was more of advanced growth stage rather than germination rate, we believe the results will be similar regardless as long as you grow seeds of high quality. 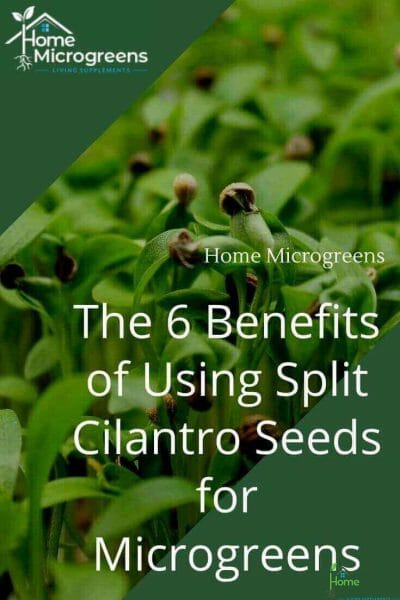 Both the whole and spilt cilantro seeds produced nice trays of cilantro microgreens.

But we see several benefits to using split seed over whole seed.

Before this test, we used whole cilantro seeds mostly because the price was less expensive. We often had problems with small patches of fungus growing on the seeds during the blackout period. Not enough to lose the whole tray, but still enough that it reduced the yield.

We did find that soaking the seed and then rinsing with food-grade hydrogen peroxide solved the fungus problem.

When we tried split seed, the fungus was less of a problem. It could have been the seed lot that caused the problem, but we grew from several seed lots and supplier for that matter, and whole seed often grew fungus.

Maybe the cause is the closed nature of the cilantro seed pod?  We aren't sure.

So we believe split cilantro seeds reduce the possibility of fungus growing. 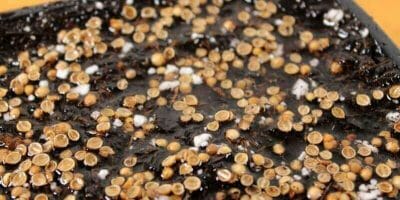 Spreading dry seeds and wetting later is much easier than dumping a clump of seeds onto the soil.

It's much easier to spread dry seed with a shaker bottle than dumping a clump of wet seeds onto the soil and spreading them out with your fingers.

We eliminated the chances of fungus in this test by pre-germinating and rinsing both seed types before planting.

We found the following benefits:

For those reasons, we believe that split cilantro seeds are better to use than whole seeds when growing microgreens.

Seeds come in pre-packaged sizes perfect for the Home Microgreens trays, 5 by 5 trays, 10 by 10 trays, as well as by the ounce.

Click the button to see all of the options. 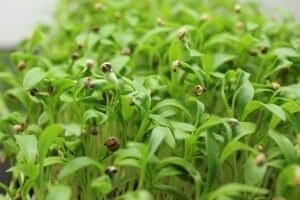 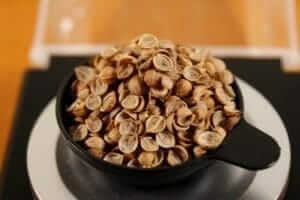 Drop a comment below and let us know what your experience is with growing cilantro microgreens? We'd love to hear about it!

His microgreens have appeared in Better Homes & Garden magazine and other websites.
Todd worked at a large farm market, garden & nursery center for 20-years. Somehow he snuck off to become a geologist and professor before coming back to his senses to write & lecture about microgreens and gardening. He will be in the garden, trout stream, or on a mountain trail with his Springer Spaniel Caden when not at the computer.

Episode 003 – Why We Hate Peat Moss For Growing Microgreens

How to Grow Lovage Microgreens: Fun, Flavorful, and Aromatic

How to Grow Lettuce Microgreens: Finding the Correct Seeding Density

How to Grow Kale Microgreens Perfectly Every Time 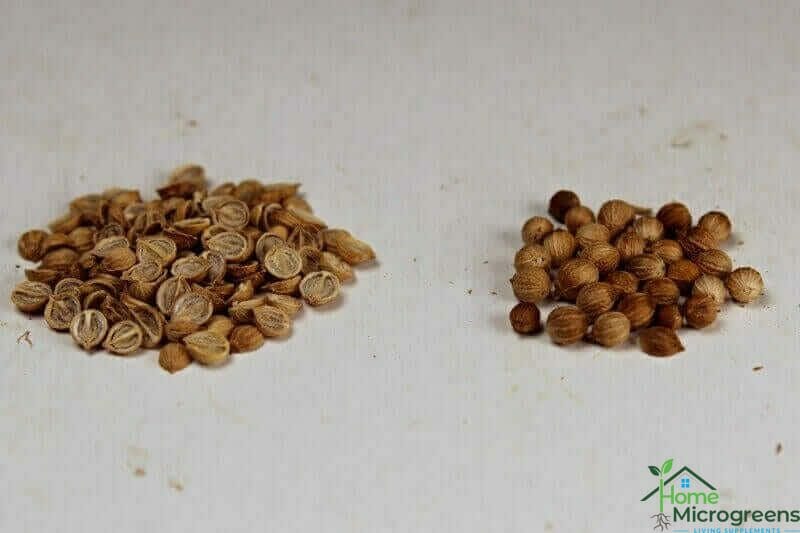 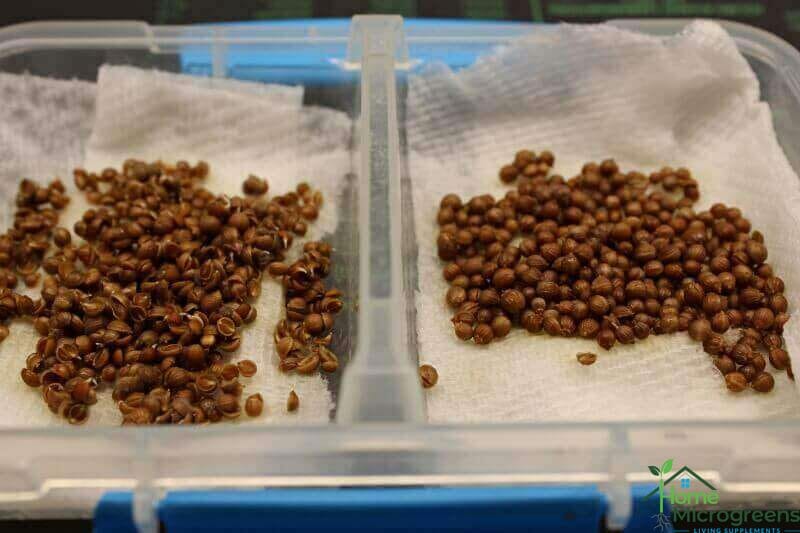 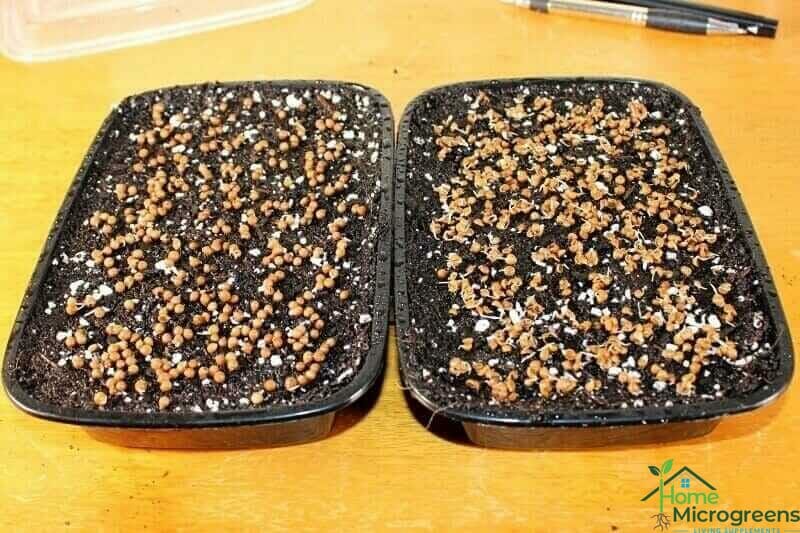 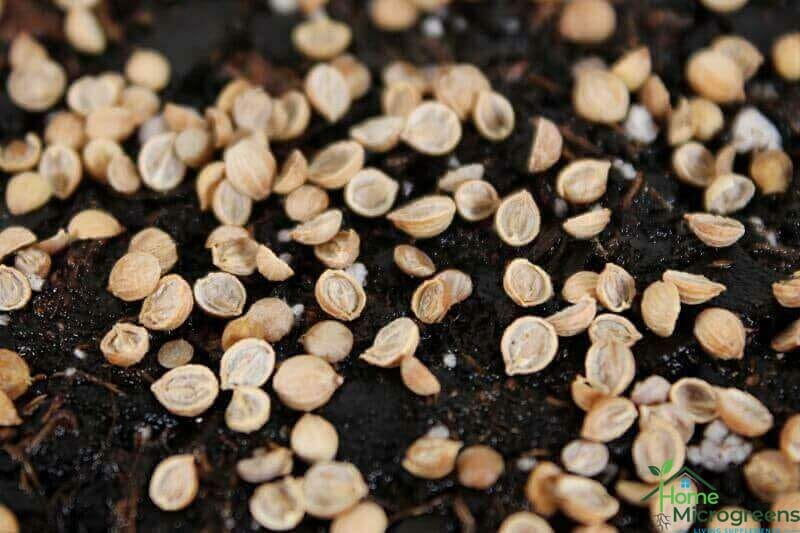 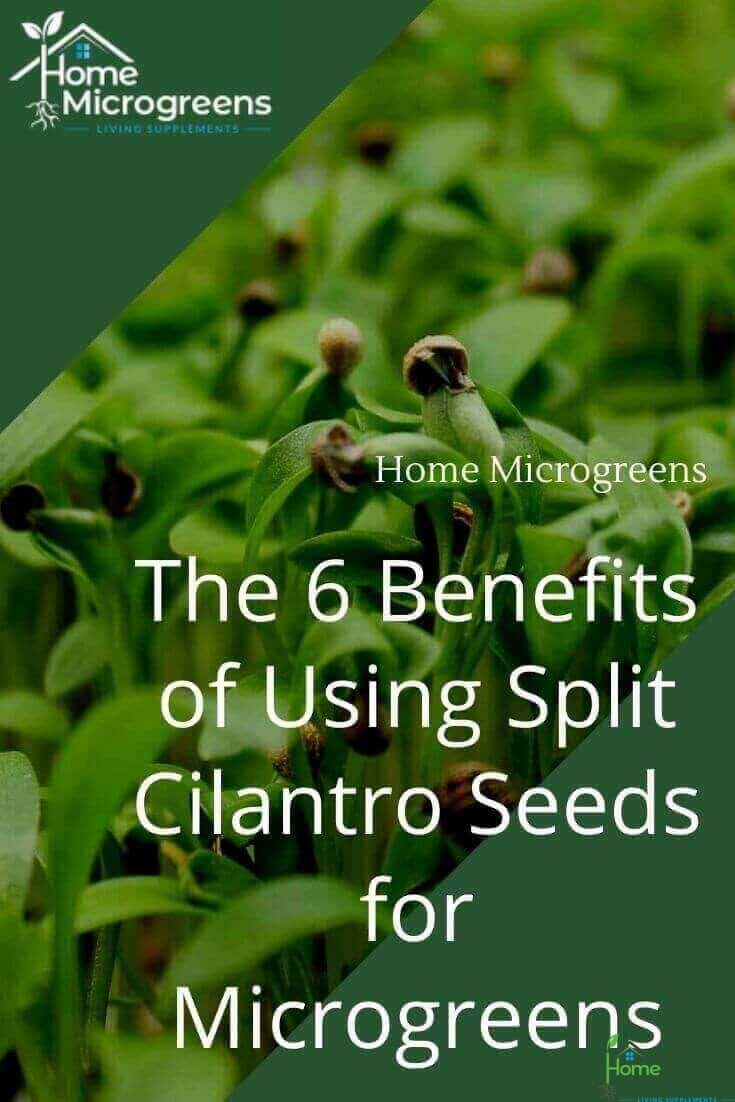