This is the second of three articles on using Terrafibre™ hemp mats for growing microgreens. It's also the first of two articles on a liquid organic fertilizer called Ocean Solution.

In the first article and video, Grow Mats For Microgreens – Growing With Terrafibre Hemp Mats – Part 1, we saw that cabbage microgreens grew better in the potting mix.

However, as mentioned, the hemp mats have no added nutrients, while the potting mix does.

The purpose behind this article is to see if adding a liquid organic fertilizer when watering will improve growth in the microgreens grown on the Terrafibre™ mats.

The video explains the test and shows the surprising results!

In the test, we used a liquid organic fertilizer called Ocean Solution.

We think this ORMI certified organic fertilizer is interesting because it is derived from deep ocean water.

Ocean water contains all of the 90 naturally occurring elements. If the desalination process used to reduce the products salinity retains all of those elements. It should also provide microgreens with all they need to grow.

We will vet Ocean Solution a bit more in an upcoming article. We will also explain how we used the liquid organic fertilizer further down in the article. 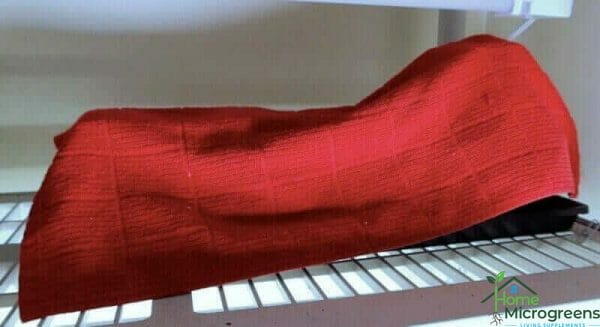 We started them the same as we did in Part 1 of this grow mat for microgreens series. All four trays are in the blackout with weight on top of the lids.

Why 4 Trays of Microgreens?

We grew four trays of microgreens to test how well Ocean Solution performs with hemp mats and test if the liquid organic fertilizer improves microgreens grown on soil.

The test will also confirm the results from Part 1 of this series.

Below is a photo of the four trays when they came out of the blackout. 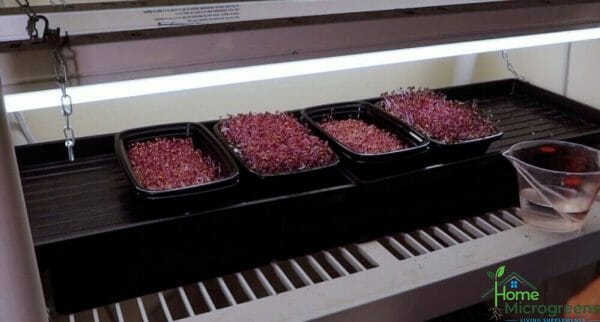 We Use These Microgreen Trays

We use Bootstrap Farmer Shallow Heavy-duty trays when we plant 1010 or 1020 trays. We also use their deeper trays to plant peas or other uses.

These trays will never be damaged with normal use.

When we grow microgreens for ourselves we use the Home Microgreens Trays & Soil. We like the amount of microgreens these trays grow and we find we can either stagger plantings or double up trays to fit our microgreen needs.

Here's Where We Diverge From Part 1

In each set of trays, the tray on the left is Terrafibre™, and the right trays are filled with Home Microgreens Potting Mix.

The trays containing the hemp matting are elevated above the bottom of the watering tray by pieces of broken plastic clothes hangers. This allows the mat to soak up water but not flood the mat.

The trays of microgreens are watered once they come out of the blackout (those above have already been watered) and checked daily to see if they need more water.

If not, why not start one! Use this pin as the first or add to your existing boards. 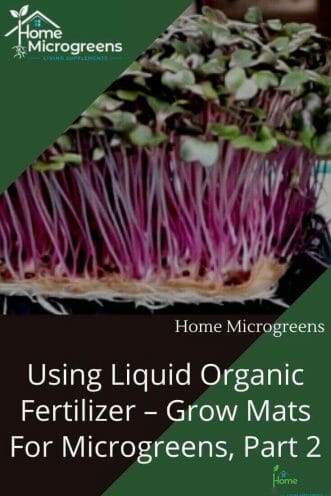 Ocean solution is a clear concentrated liquid certified organic fertilizer with an analysis of 2-0-3. As with most organic fertilizers, don't worry too much about the NPK analysis. Results are what we are looking for.

Since the fertilizer is concentrated, it needs to be diluted before application.

Ocean solution can be used in many different applications. For hydroponic growing - basically, what we are doing with the mats - the recommended dilution is 0.5- to 0.75-ounces of Ocean Solution to a gallon of R.O. water.

Just forget you read R.O. water because we did.

We only used tap water.

Maybe we could have gotten some distilled water, but, yeah, that seemed like a wasted trip to the store. I'm not positive what the conductivity of our tap water is here. We'll explain more about the fertilizer solution's conductivity and E.C in the dedicated Ocean Solution article.

Maybe, or add it to the article after once we get a good conductivity meter. 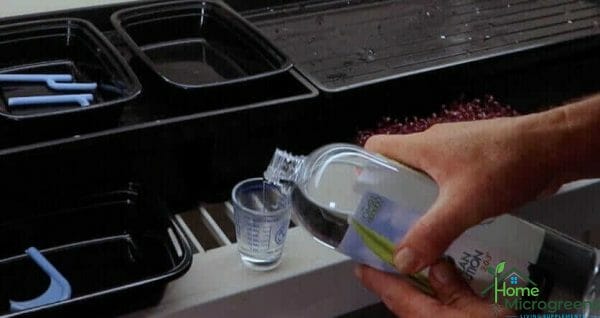 Measuring out 5-mL of Ocean Solution to add to 20-ounces of water.

Anyway, we didn't need a gallon of fertilizer, maybe 20-ounces.

We figured 5 mL was close enough. So that's what we used. To 20-ounces of water, we added 5-mL of Ocean Solution.

Rather Listen than Read?

Adding Fertilizer To The Trays

The mats still soak up the water, and some of the red cabbage microgreen roots have already grown down through the holes in the planting tray to access the water.

Water is added to the trays when they're removed from the blackout period. And anytime after they feel or look dry. Microgreens are only bottom watered, never from the top once they've germinated.

By day 1, we mean the first day after we fertilized the microgreens.

We were so surprised!

Not surprised by how green (or purple) the microgreens became; that happens every time the lights are turned on for the first time.

But instead, by the growth of the microgreens on the Terrafibre™ and Ocean Solution tray when compared to the one that wasn't fertilized. Compare the leftmost tray to the middle-right tray.

Once day under the lights, and one day with fertilizer added. Again, from left to right, Tray one is grown on Terrafibre and with Ocean Solution. The third tray to the right is Terrafibre watered with plain tap water.

I expected to see a difference at some point in the fertilized trays, but not after less than a day!

Notice there isn't much difference between the trays of microgreens grown in soil. Those trays are from left to right, trays two and four.

Below is a closeup of the two Terrafibre™ trays. The liquid organic fertilizer Ocean Solution has been used to water the tray on the left (first image on mobile view). You can click the picture to expand it for better viewing. 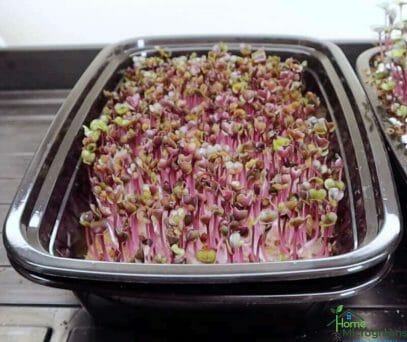 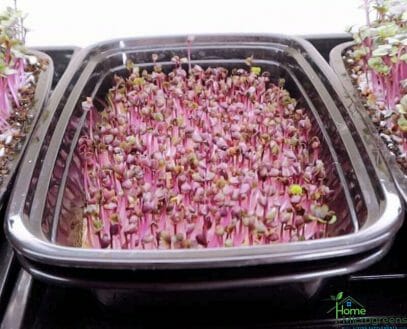 Are You Looking For Microgreen Seeds and Supplies?

We also carry our own microgreen soil and fiber mats for the home microgreen grower!

Check Out the Home Microgreens Store

Does the Growth Rate Continue?

The image was taken from the video (watch it for more information) above. The trays are in the same position. The two fertilized trays are on the left.

Look at the difference between trays 1 and 3 (left to right). That's amazing!

The Ocean Solution liquid organic fertilizer has at least tripled the size of the red cabbage microgreens grown on Terrafibre™ hemp matting.

At first, I didn't notice a difference between the fertilized and non-fertilized microgreens grown in soil, trays 2 and 4, respectfully.

But after looking at the images, the microgreens watered with Ocean Solution (tray 2) are a bit tighter and grown more densely together. While tray 4 might be a bit taller and the leaves slightly bigger are more open and have a looser dome.

However, there isn't much difference, and wouldn't buy and use a fertilizer (added cost and steps) when growing in Home Microgreens Potting Mix. More on this later in the article.

The point of this article is to see if using a liquid organic fertilizer on microgreens sowed on Terrafibre™ will grow as well as microgreens grown on soil.

Let's take the microgreens grown on the hemp mat out of the deep tray and raise them up to the same level as the soil to compare their growth.

Not the best image, but you can see that the growth is very similar. The only difference, really, is that the microgreens grown on the hemp (left tray) have been forced to grow more upright due to the sides of the tray.

This crowding could also cause slightly smaller leaves on the microgreens grown on the hemp mat.

Overall, growing microgreens (those that can be grown on mats) on Terrafibre™ hemp mats using a liquid organic fertilizer like Ocean Solution is as good as growing on soil.

Conclusions & Recommendations From This Test

Hemp mats, such as Terrafibre™, are an excellent alternative to growing microgreens on soil when a liquid organic fertilizer is added to the water.

Adding Ocean Solution to the watering tray had an obvious and significant benefit to the microgreens growing on the hemp mat.

Ocean Solution did not appear to add many benefits to microgreens grown on Home Microgreens Potting Mix. However, it might work well on the other potting mixes we have tried and did not meet our potting mix's success.

We plan to test pure coconut coir with Ocean Solution to see if microgreens will grow better and calculate if there is a cost-saving when combining these two products.

We will post a link here when that article is published, or you can get alerted by getting our updates.

You can purchase either of these products using the links below.

At first look the price seems expensive, but to grow two trays of microgreens we only used 5 mL. So, the bottle shown would grow around 190 trays!

We will try to work out a deal or discount with the makers of Ocean Solution.

His microgreens have appeared in Better Homes & Garden magazine and other websites.
Todd worked at a large farm market, garden & nursery center for 20-years. Somehow he snuck off to become a geologist and professor before coming back to his senses to write & lecture about microgreens and gardening. He will be in the garden, trout stream, or on a mountain trail with his Springer Spaniel Caden when not at the computer.

How to Germinate Microgreens Part 3: The Domed Blackout Method

What Are True Leaves on Microgreens

Can You Reuse Microgreen Soil? Episode 009 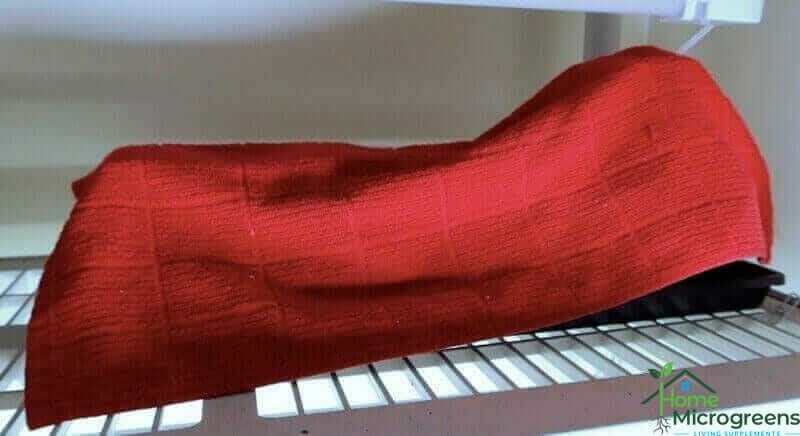 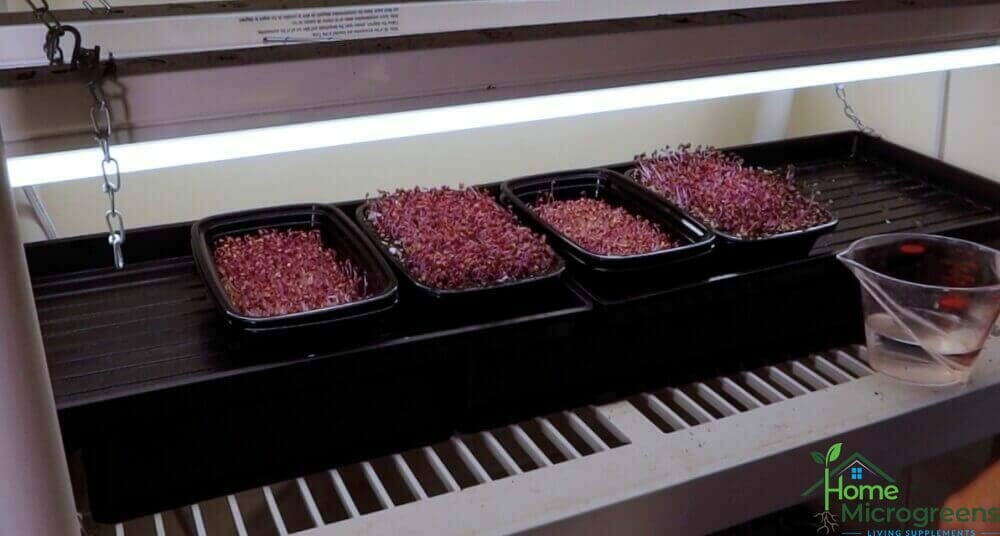 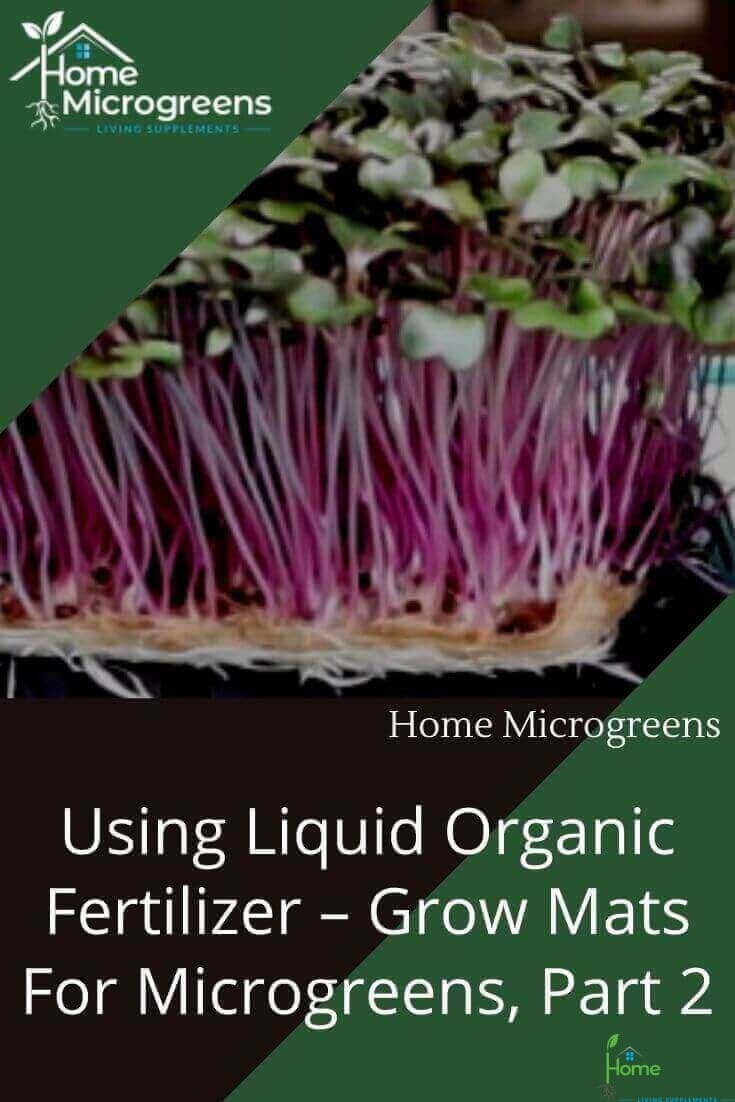 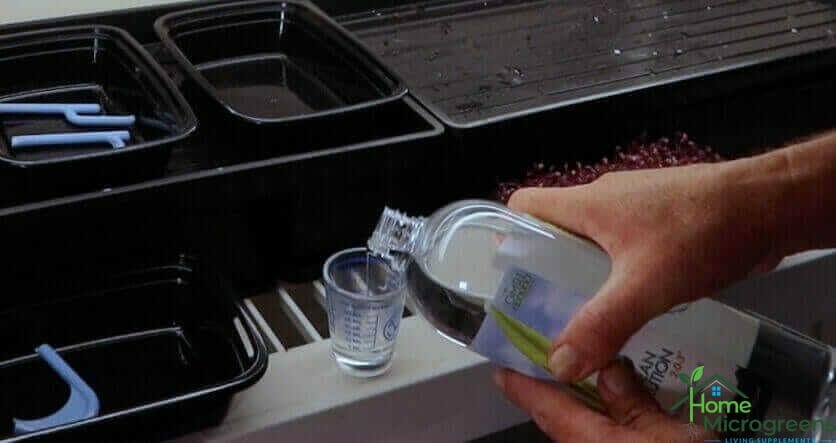 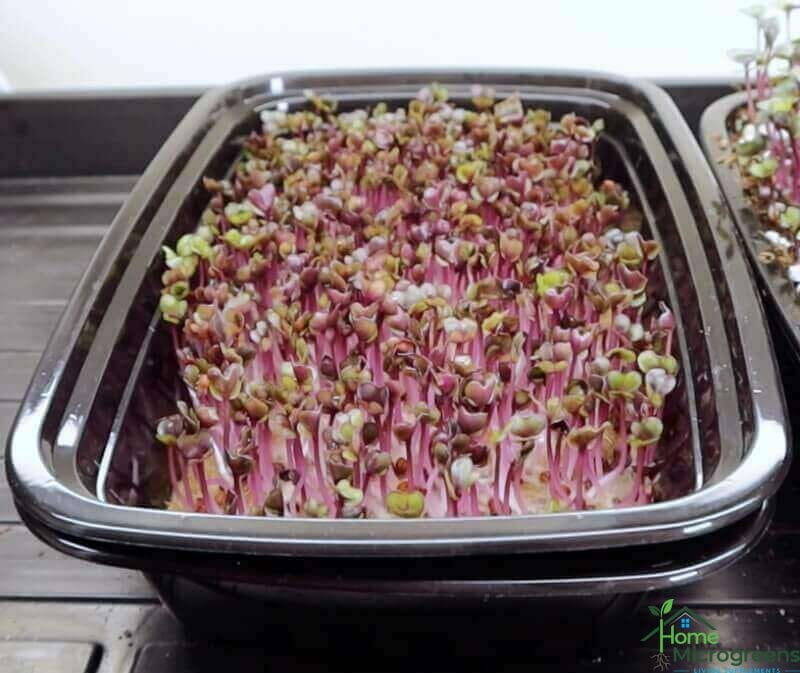 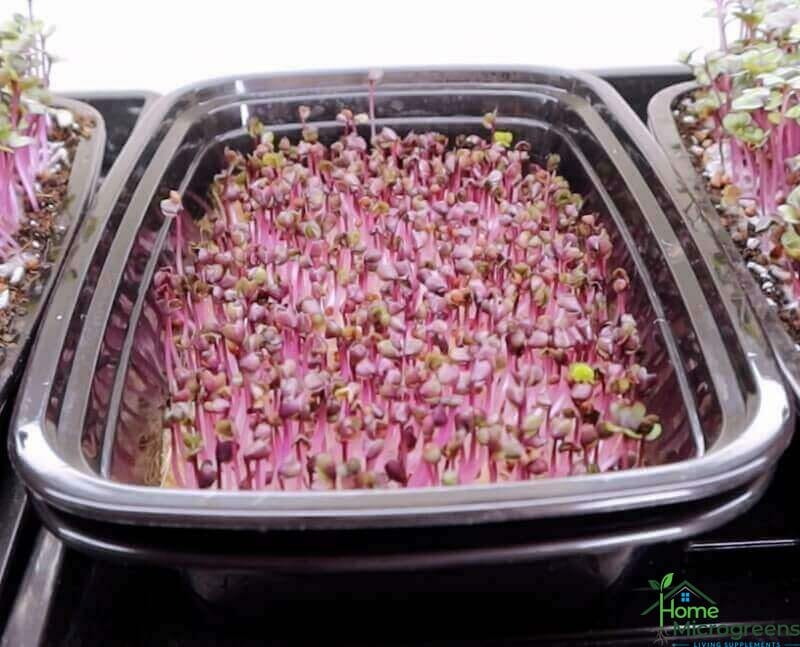