Red Garnet Amaranth microgreens are the most vibrant microgreen we grow.

One could argue that Bull's Blood Beets are just as bright, and more widely known to most people. But the delicate, almost thread-like stems of amaranth, and the earthy flavor they add make amaranth an ideal garnish to salads. 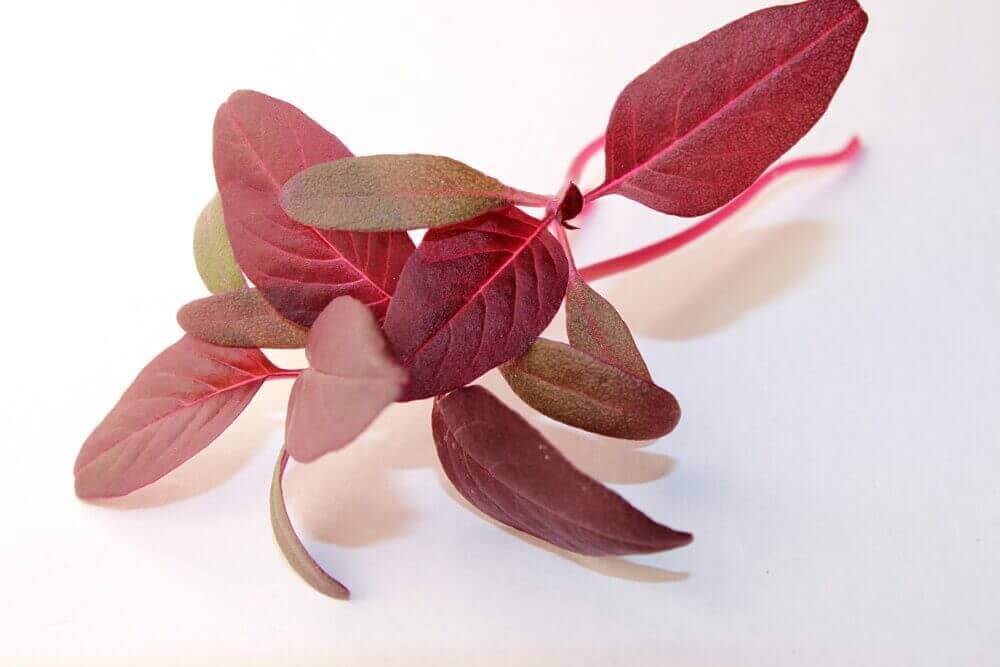 How to Grow Amaranth Microgreens

We published an article, How to Grow Amaranth Microgreens a little while ago using our standard microgreen growing method by placing a lid right on top of the seed, adding weight to the lid, and covering the whole tray with a towel to exclude light.

We are now calling this the Weight Method.

However, once in a while, we ran into some problems with this method while growing amaranth microgreens.

Actually, a couple of problems.

One was a complete damping-off disease problem. Where the seeds and seedlings turn basically to mush and produce a fungus.

The other, unique to amaranth, is what we called the spaghetti syndrome. Where the amaranth plants rapidly grow horizontal under the weight, so they look like a tray of spaghetti when you remove the cover. 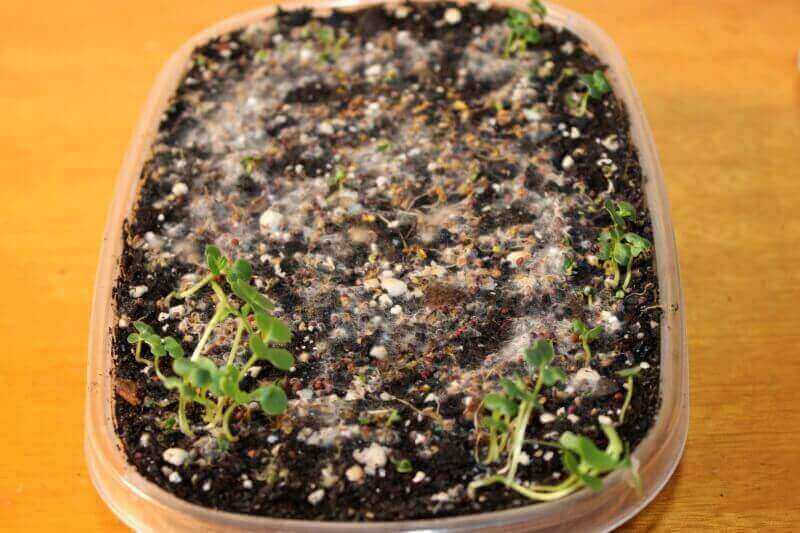 Damping-off disease where the seeds and plants rot in place (image is not of amaranth). 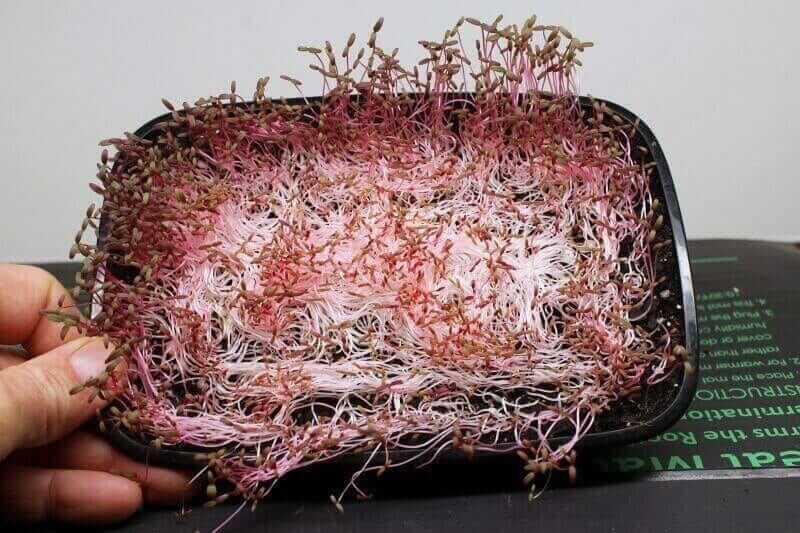 What we call the Amaranth Spaghetti Syndrome. Where the plants grow horizontal and twist during blackout.

Once the amaranth is compacted and twisted by the spaghetti syndrome, it never complete recovers, and the tray has a minimal harvest weight.

It's Really the Growers' Fault

Damping-off and the spaghetti syndrome isn't a problem with the Weight Method of growing microgreens. It's the growers' fault for not checking the germinating microgreens often enough, adding too much moisture to the soil, placing the tray on a heat mat, or leaving the amaranth in the blackout period too long.

It's not that you can't grow amaranth using the Weight Method; instead, it takes a bit more diligence caring for the plants. The delicate, thin stems and root system of amaranth are susceptible to extra moisture and damping-off disease to begin with.

Those same thin stems don't have the power that most microgreens have to push the weight upwards. So they snake and twist around under the lid if not released from the burden of the load.

The alternative method we use to grow some microgreens, mainly mucilaginous seeds, we call the Black Dome Method.

The Black Dome Method still includes a blackout period; however, no weight is put on top of the seeds.

The Black Dome Method shows the versatility of the Home Microgreens Trays. 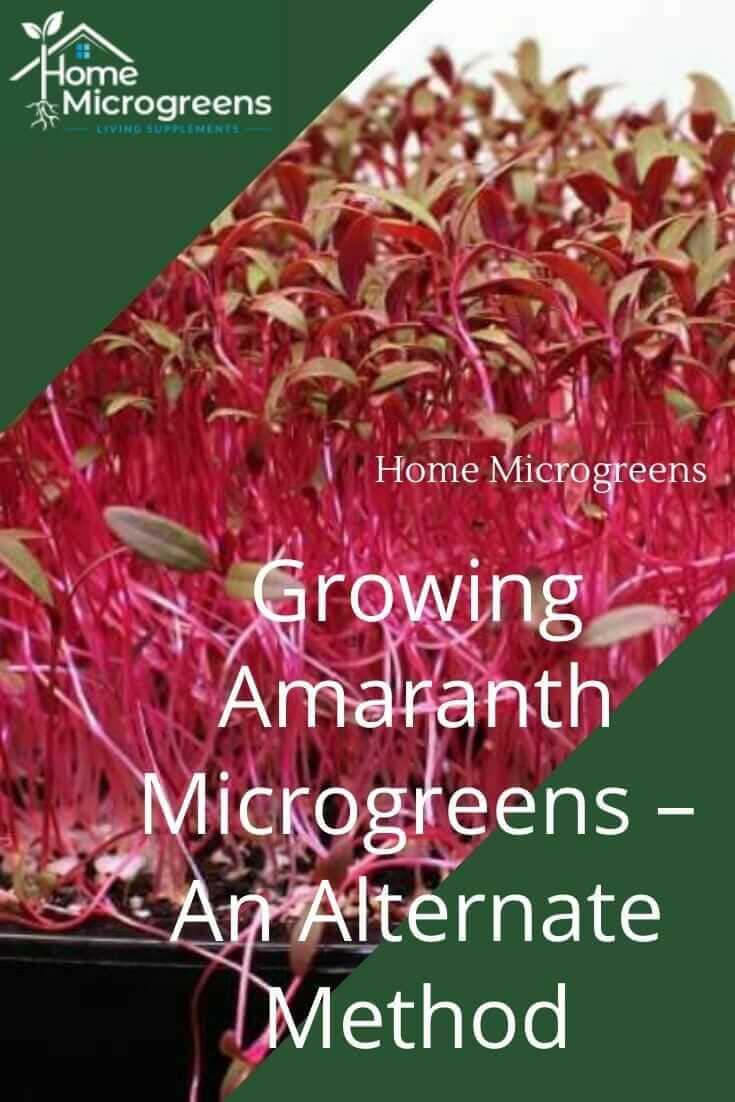 The first four steps in the microgreen sowing process are the same as in the first Amaranth growing article.

Add soil, wet the soil, sprinkle on the seeds, and wet those down. These steps remain the same.

So let's pick it up the Black Dome Method on Step 5. 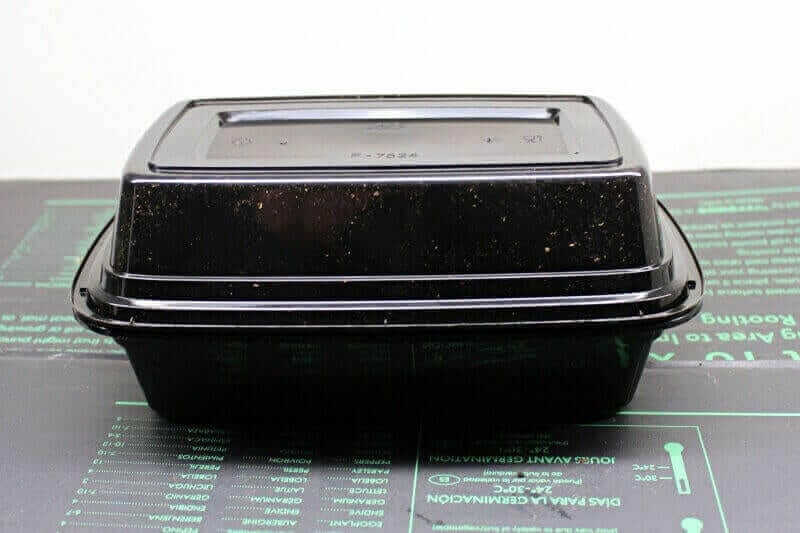 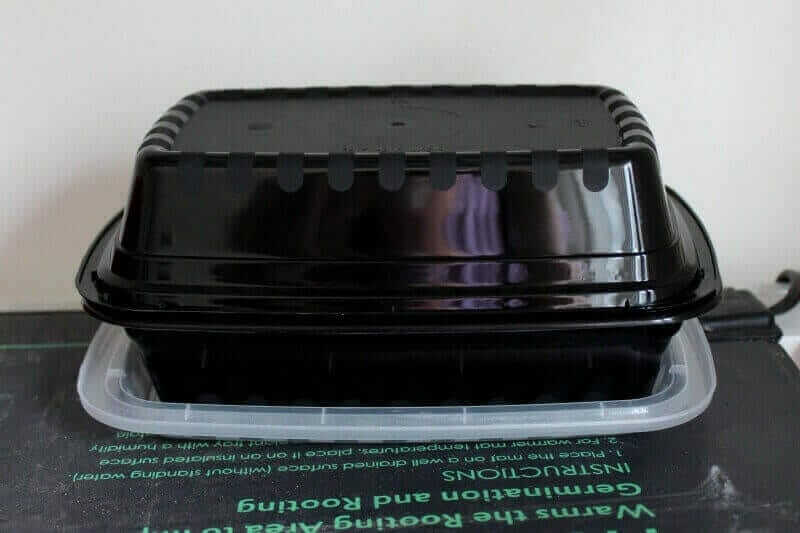 We Use These Microgreen Trays

We use Bootstrap Farmer Shallow Heavy-duty trays when we plant 1010 or 1020 trays. We also use their deeper trays to plant peas or other uses.

These trays will never be damaged with normal use.

When we grow microgreens for ourselves we use the Home Microgreens Trays & Soil. We like the amount of microgreens these trays grow and we find we can either stagger plantings or double up trays to fit our microgreen needs.

The dome excludes light, but still retains moisture for the seeds to germinate. Since amaranth is a shallow rooting microgreen, and the microgreen itself is skinny, there's no need to add weight to increase the vigor of the root system.

Step 6 is the same; allow the seeds germinate for at least 48-hours. Don't remove the dome, let it to retain any moisture that my evaporate from the soil.

On Day 2, take a look at the amaranth seeds. You should see a few of them starting to germinate, and maybe a few growing. Amaranth seeds don't germinate at the same time. Many lag behind. 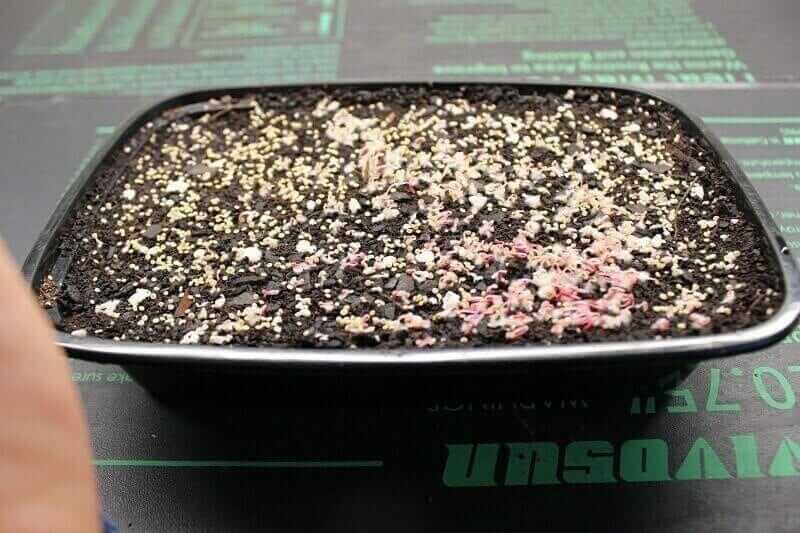 After two days, some of the seeds should have germinated. Others will take long. Place the blackout dome back on top and check back everyday.

Place the blackout dome back on top and check them every day. Unlike with the Weighted Method, a quick check of the seeds by removing the dome won't upset the tender roots.

However, don't let too much moisture escape.

Below is the same tray one day later. 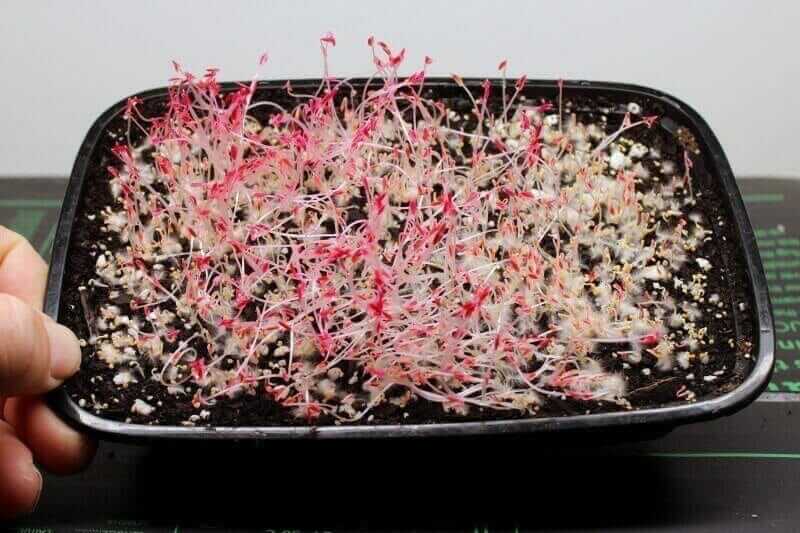 Many more of the seeds have germinated! But it still isn't time to water or remove the blackout dome. Check for any fungus or mold. There will be some white root hairs, so don't mistake the later for mold.

Ready to Try Your Hand at Growing Microgreens?

The Home Microgreen Trays and soil are versatile and inexpensive. Give them a try, besides amaranth, the Home Microgreens Store has 30 varieties of seed all pre-packaged from the HM tray or you can buy seed by the ounce.

Amaranth plants are sensitive to wetness, so when you remove the cover, try not to let the condensation pour onto the plants if you can help it.

Check for any mold or fungus every day from now on. If the plants look good, put the blackout dome back on and check them tomorrow.

If you notice some mold (be sure it isn't root hairs), remove the top and place the tray in an area with some ventilation or air movement.

A light mist of food-grade hydrogen peroxide may help if there's an area of mold.

We left these Amaranth microgreens under the blackout dome for 12-days. It isn't necessary to keep them under blackout that long. When they reach an inch or more in height you can remove the dome.

Now, you could've removed these microgreens from the blackout from Day 6 or 7 if you want. Play it by ear and experiment how you like your amaranth microgreens.

The key is to pay attention to moisture levels. The amount of moisture will depend on how much you wet the soil during sowing and the humidity of the area you are growing them. The hotter and warmer, the quicker the amaranth will grow.

The sooner you remove the microgreens from the blackout period, the more leave mass will form on the plants. I prefer smaller, a brighter red, amaranth microgreens.

Place the tray of amaranth microgreens under an LED light or in a window sill. Amaranth doesn't need much light, but the leaves will have less green pigment and brighter red color if the light intensity is stronger.

Once the microgreens have been removed from the blackout dome, you can bottom water, as explained in the first article.

These amaranth microgreens are ready to be harvested. In fact, they could've been harvested much sooner, but as you can see, they have a long shelf life in the Home Microgreens Trays (click image to expand). 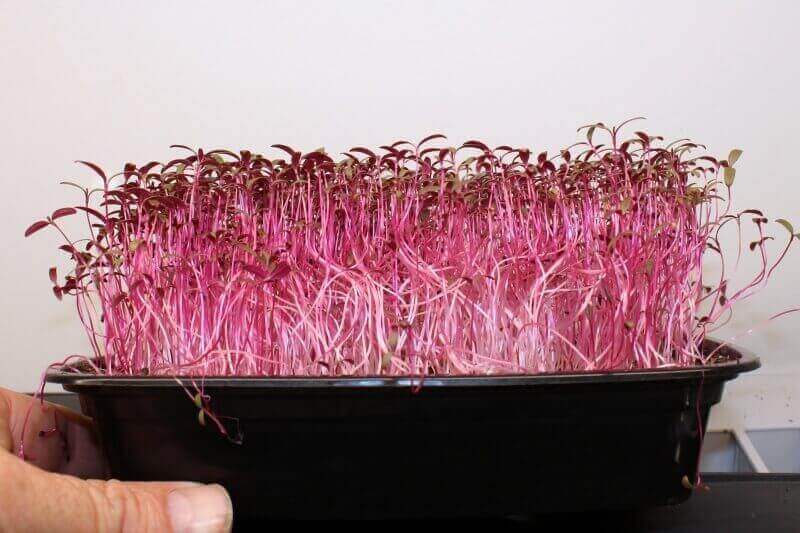 Day 21 - This is how we like Amaranth microgreens, with smaller leaves. 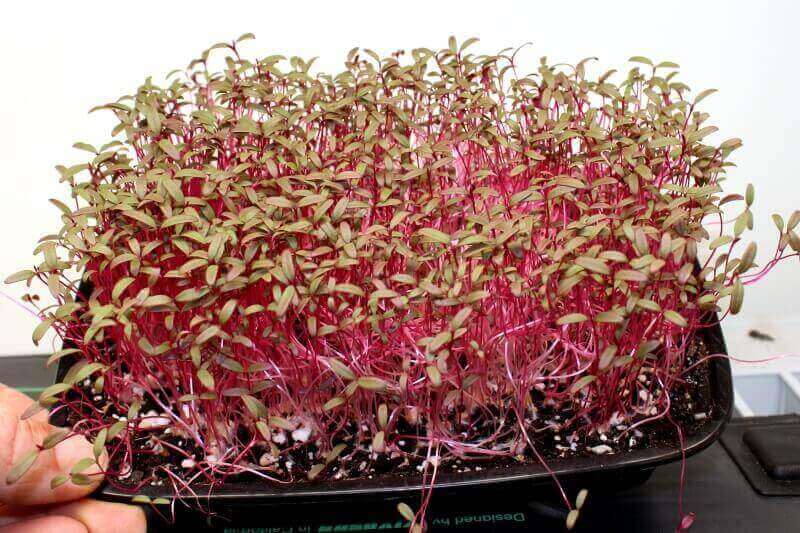 Amaranth microgreens can be grown by either the Weight or Blackout Dome method. We have found that the more microgreens we have growing, the harder it is to stay on top of their needs.

For that reason, we have switched to the Blackout Dome Method to grow Amaranth microgreens. The method is more forgiving, and it's quicker to check on the growth using the dome.

What Method Do You Prefer? Weight or Blackout Dome Method?

We love to hear from our readers!

If you have any questions about the information in this post or microgreens, in general, please leave a comment below or reach out to me using the Ask a Question page.

Episode 005 – How to Grow Celery Microgreens

The Best Soil for Microgreens