Episode 021 of the Microgreens Podcast

Episode 201 of the Microgreens Podcast is an Answer the Public random question.

In the podcast, we answer do microgreens regrow after you cut or harvest them?

We hope you enjoy the Podcast!

Do Microgreens Regrow After Cutting Them?

For the most part, microgreens do not regrow, or regrow well after harvesting them.

Of course, there are exceptions.

We have found that the following microgreens will regrow. They include:

Those are the microgreens that we have come across that seem to regrow to the point that you can harvest them again.

However, there are issues. Such as the following.

The only microgreens we find worth regrowing again are lettuce, peas, and celery.

Below is the transcript of Episode 21 of the Microgreens Podcast.

In today's podcast, we will answer a very common question.

Do microgreens continue to grow?

Welcome to episode 21 of The Microgreens Podcast.

Today, we will answer a very common question: do microgreens continue to grow?

And I guess this could be a two-part question, but I'm assuming the question is more of, can you harvest the microgreens, and will they regrow?

Because obviously, microgreens will continue to grow if you leave them alone, and most are vegetables or grow into baby leaf size plants.

So, you can grow them to the baby leaf stage if you give them enough room, or they can grow into larger garden plants.

But there are some problems with continuing to grow microgreens, and we'll get into those in this podcast.

The Answer to Do Microgreens Regrow?

So, the short answer is it depends.

For the majority, though, the answer is no.

However, some microgreens, for example, onions, which are sort of a grass and wheatgrass, will regrow.

Or peas, often we're cutting them higher up on the stem.

There's some leaf left, and you'll get a new flush of growth off of them.

So, I'm going to go off the top of my head here because, remember, these are just random questions. I'm picking them off a spreadsheet.

The Best Microgreens to Regrow Are

I guess the best ones that I regrow are peas, you can regrow without a doubt. But, when I'm growing them commercially, in other words, for selling, I don't let them regrow again because you just don't get the quality of greens off them on the second cutting.

However, if I'm growing them for myself or want pea microgreens that week, I let that tray continue to grow.

Celery is another one. A lot of the herbs will regrow.

Onions or leeks are another one. They're sort of like a grass, so they grow from below. You're not really hurting them by cutting them off; they’ll just continue to flush up. So, onions and leeks will regrow.

And geez, off the top of my head, I think that's about it, or at least the ones that you get a decent flush off.

Now they're the odd ones, especially if you cut them high, they will regrow.

And you're more than welcome to try to regrow any of them, but you're not going to get the same quality microgreens off the second cutting.

They're going to be a little bit smaller.

A lot of times, the soil just doesn't have any more energy or any more nutrients left for them, so they're winding down anyways, especially like the herbs where celery has been in the tray for probably 30 or 40 days, to begin with, you're going to have to fertilize them.

Peas would be the exception. Generally, the second flush on peas is slightly more tender, but then you run into the problems that they root so much.

They have such a thick root structure that it is hard to water them. You put water into the tray, and it just doesn't absorb. It's just all root mass. If you try to water them over the top, it either just runs off, or the extra seed that's there starts to rot, and they start to smell.

So, you can get two to maybe three cuttings off of peas, but it's going to be lesser quality and lesser quantity.

Oh, lettuce is another one you can get two or three cuttings off of. I have gotten four cuttings off a tray of lettuce, but that last cutting was very, very, very bitter.

It wasn't very good at all.

So, generally, I just do two cuttings off lettuce, and again, they sort of get root-bound.

Before I recap what microgreens will regrow and some of its problems, I want to thank our show sponsors. The first is homemicrogreens.com.

And if you'd like a free growing guide to how to grow microgreens, go to homemicrogreens.com/guide, and that'll take you to a page where you can put in your name and email, and we will deliver that PDF to you.

I will also include a link in this show notes that'll take you right to that page to put in your name, email and get the free guide.

So, please check out the Home Microgreens Store. 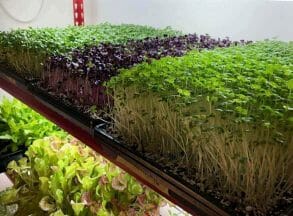 In most cases, it's not worth letting your microgreens regrow, even if they would.

One, generally the second growth, the regrowth is just slower.

It's much faster to plant new seeds and get a fresh supply of microgreens instead of waiting for those cut microgreens to recover and grow again.

Second, they're generally slightly more fibrous, probably less nutritious, and just not as flavorful as that first flush of growth.

You're also going to get, if you do get a new harvest, it's going to be a much smaller harvest.

So, it's sort of a waste of resources.

Another thing to consider is disease and mold. The longer we let these grow on the soil media or the grow mats, the longer these bacteria colonies have a chance to get established.

So, you're increasing the probability of disease and mold issues if you let these microgreens regrow on the soil media or even grow mats. Especially grow mats, in my opinion.

That said, some microgreens will regrow.

Let's go over some of the varieties that will regrow.

Lettuce, for sure, will regrow. You can get at least two cuttings, if not three, off of them. But, again, the fourth will tend to be a little bit bitter, and they start to get root-bound, and they're tough to water.

Also, the lower leaves will start to get brown, and it takes a little longer to get a good leaf off the new harvest when they've gone about three or four times.

Peas, for sure, peas will regrow. They're probably the most common ones at regrowing. You cut them off a little bit higher; they’ll regrow. I think the second flush tastes just as good as the first, but it is slower. You don't get as large a leaf, and you have to water them much more often. They're a little bit more care.

Onions and leeks will regrow very easily. They're probably one of the easiest ones to regrow. They just shoot up from the middle. They might be slightly slower, but I think you get a good second cutting off onions or leeks.

So, that's my thoughts on regrowing microgreens. I generally do not regrow them myself.

Occasionally I let peas or celery grow, but usually, I just put the tray into the compost pile and start new ones all over again.

Because I think you get better results with fresh seeds than from regrowing.

And that's my opinion on, will microgreens regrow.

But you're more than welcome to take your tray of microgreens and see if it will regrow.

I mean, all you have to lose is a little bit of time, and maybe you'll get better results or different results than I do.

I'd love to hear about it if you do.

I have heard that kale can regrow. I don't see how because your harvest is so low, and it's sort of slow-growing, but hey, give it a try. That's what this is all about.

So, I hope this podcast was helpful.

I hope you got something out of it, and don't forget, if you're looking for a free home microgreen guide, go to homemicrogreens.com/guide, and you can download a 16 page PDF that shows you the process of growing microgreens in your home.

Also, don’t forget to stop by the Home Microgreens Store and pick out some new seeds for 2022.

I can't believe another year has gone by. 2021 has been challenging, but I'm looking forward to 2022.

So, Happy New Year, everybody, and get out there and grow more microgreens next year.

Microgreen Growing Mediums: What We Found to be the Best

Episode 001 – An Introduction to the Microgreens Podcast

How to Grow Lettuce Microgreens: Finding the Correct Seeding Density

How to Grow Kale Microgreens Perfectly Every Time

How to Grow Radish Microgreens Using My 2 Favorite New Varieties 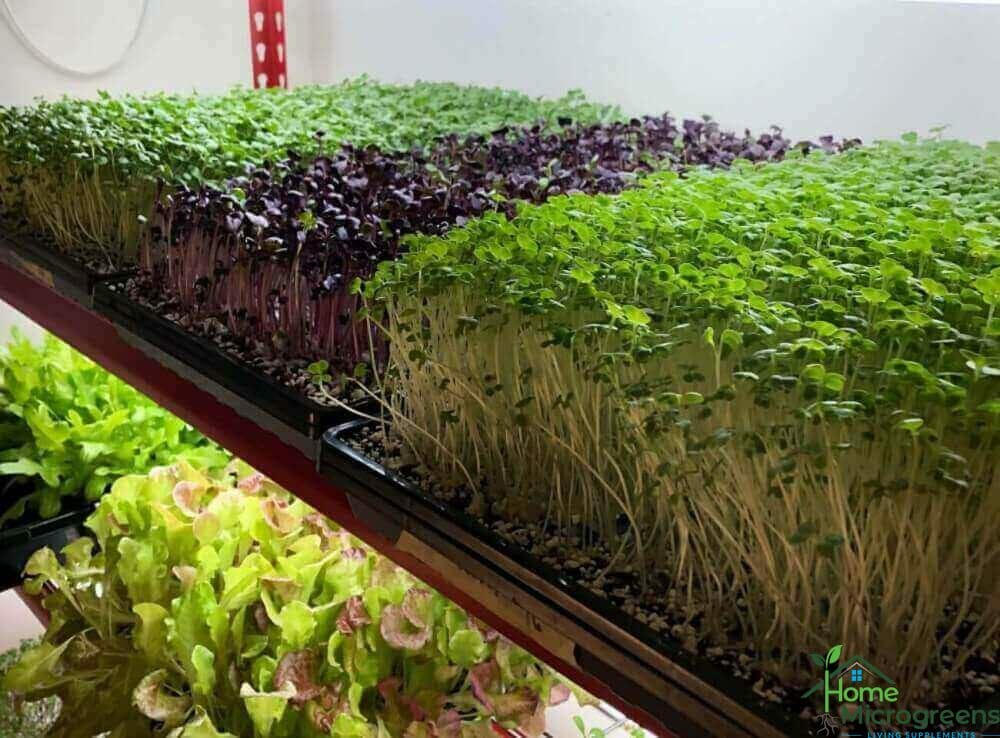