How Many Microgreens Should You Eat Per Day?

What's the Difference Between Sprouts and Microgreens?

A common question asked at my presentations and in emails is what's the difference between sprouts and microgreens.

Although you use the same seeds for both sprouts and microgreens, the germination and growing methods are different (see below). However, not all varieties of vegetables and herbs are grown as sprouts or microgreens.

What Parts of the Plant Are Eaten?

When you harvest sprouts and microgreens, different parts of the plant are harvested.

When you harvest sprouts, you consume many parts of the seedling, including the radicle, hypocotyl, and the cotyledons.

With microgreens, you eat, some of the hypocotyl and cotyledons, and depending on the variety, maybe young true leaves.

As a side note, baby greens are eaten as young to maturing true leaves. 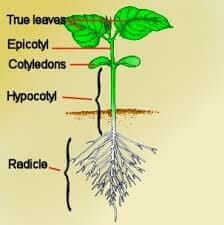 As mentioned, how seeds are germinated and grown is one of the significant differences between sprouts and microgreens.

Sprouts are grown in jars. 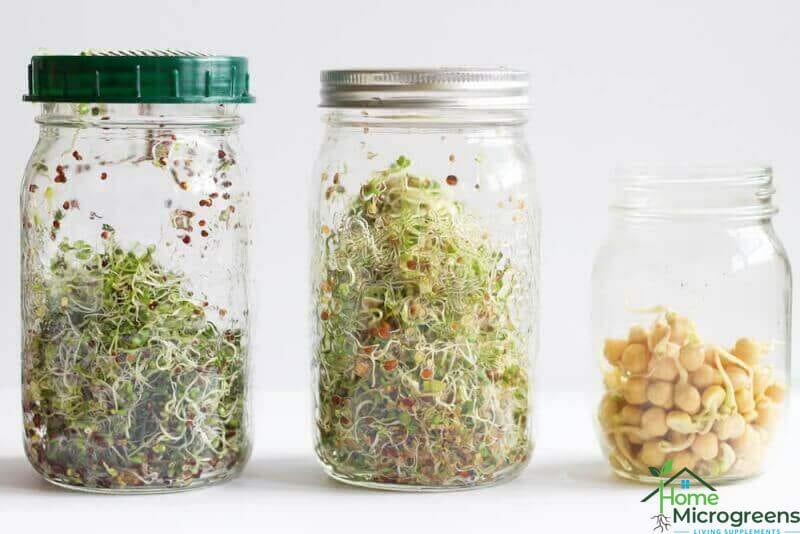 Seeds are placed in jars and soaked for 8- to 12-hours. After soaking the seeds are rinsed well and put back in a jar with a screen attached to the lid. The jar is tilted in a bowl with the seeds spaced out, so they're not clumped all together.

Twice a day the seeds-sprouts are rinsed well and drained and put back in the jar and placed tilted in the bowl again. 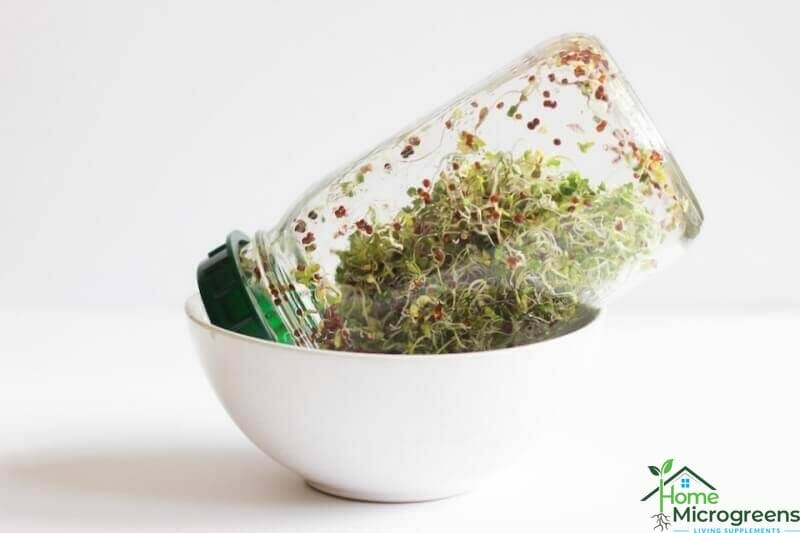 Continue that process for 3- to 6-days until the sprouts are ready to store in the refrigerator. If you wait too long, the sprout roots can get thick and tougher to eat.

For the complete process of growing sprouts, read a very concise and straight forward article on That Clean Life.

I'm not going to get into the whole process of growing microgreens in this article. You can read several detailed articles by clicking this link.

If you're new to microgreens, click the button below to see a great beginners article.

How to Grow Microgreens

It's best to grow microgreens on a soil media. They grow better and faster.

Photo taken on Day 9. The Tatsoi microgreens grown in soil are twice as tall and more mature than those grown on jute pads.

Microgreens require more time before they're ready to harvest, between 7- to 30 days depending on the variety.

As you saw with the sprouts, you eat the roots, seed, and very young seedling. With microgreens, you eat only the stem, the seed leaves, and sometimes, the first true leaves. 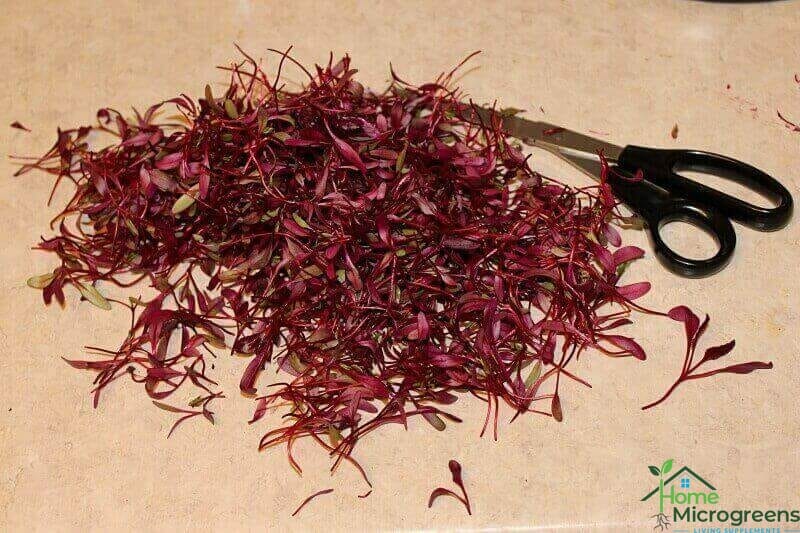 One of the Bull's Blood Beet microgreen trays after harvest.

Which is More Nutritious, Sprouts, or Microgreens?

If you want a bit of nutritional information on microgreens we've generated this list of vitamins and minerals in microgreens.

Get Your Vitamin Chart

Why We Prefer Microgreens Over Sprouts

Personally, I'd rather eat a green that hasn't been growing in water in a semi-enclosed container.

Sprouts are water-based grown, and always damp to wet. We don't want to take the chance that a strain of bacteria has colonized the greens. Now, don't get me wrong, many people have eaten sprouts their whole life and not had an issue. It might just be our thinking.

Microgreens, on the other hand, at least the way we grow them here at Home Microgreens, are grown dry after the first couple of days. Since we bottom water, the green is never wet and have less of a chance of picking up a bacterial colony.

We do recommend that you wash all food thoroughly before you eat it, microgreens included.

Microgreens have more flavor than sprouts. Of course, the taste is relative to each person, but the flavor of sprouts is one dimensional. However, most sprouts have more crunchy texture than microgreens except for radishes.

Overall, you can grow many more different plants as microgreens than you can as sprouts.

Want to Learn More About Microgreens?

Below is a list of more microgreen articles. Or you can sign-up for Home Microgreens Updates. We'll send you a short email when a new article is published, as well as tips on how to grow microgreens.

If you have any questions about the information in this post or you want to share your experience with sprouts or microgreens, please leave a comment below or reach out to me using the Ask a Question page. 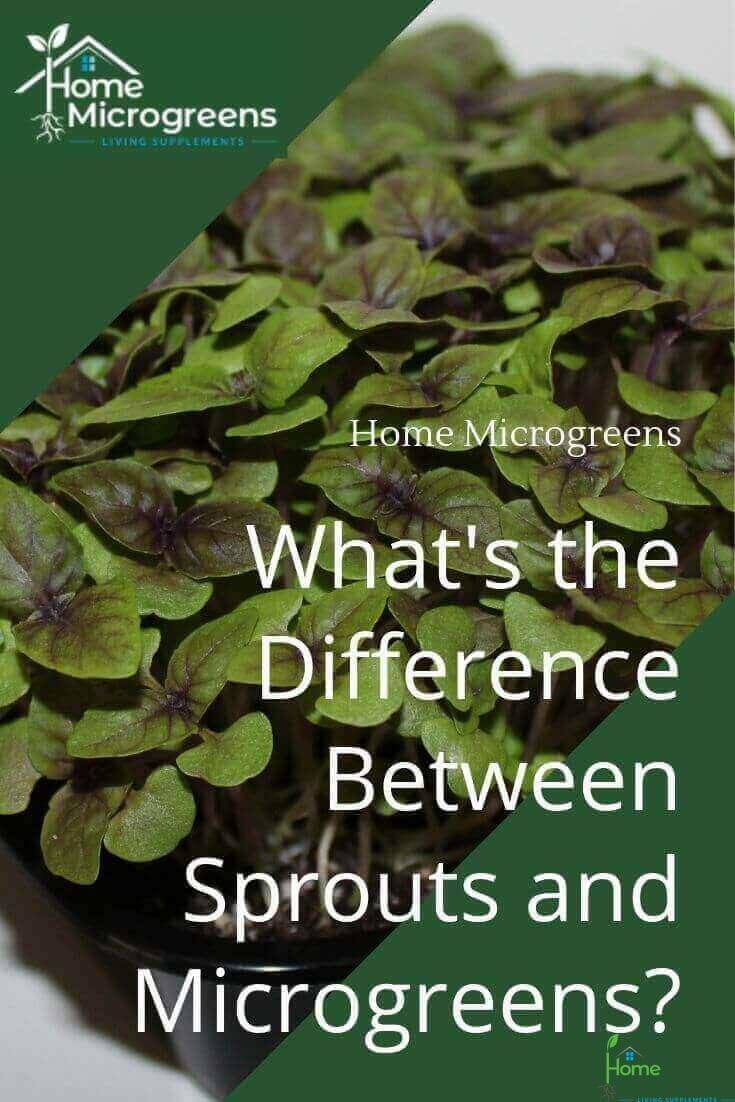 Growing Onion Microgreens and Leeks Too!

Growing Microgreens Without Soil – is it a Good Idea?

Episode 008 – How to Grow Lettuce Indoors