How To Grow Lettuce Indoors

Sunflower microgreens are very popular, and for a good reason, they have a pleasant nutty flavor, are juicy, and add great texture to both salads and sandwiches.

Growing sunflowers is quite easy, and they don't take a long time to mature. There are a few tricks that make it easier to grow sunflower microgreens, and we'll cover a couple of those tricks in this article.

The first trick is pre-soaking and treating the seeds to get them germinating.

In this article, we test if it's better to pre-soak the seeds for 12-hours or 24-hours with a side-by-side comparison grow.

Or, is it best to shorten the soak down to only 6-hours? 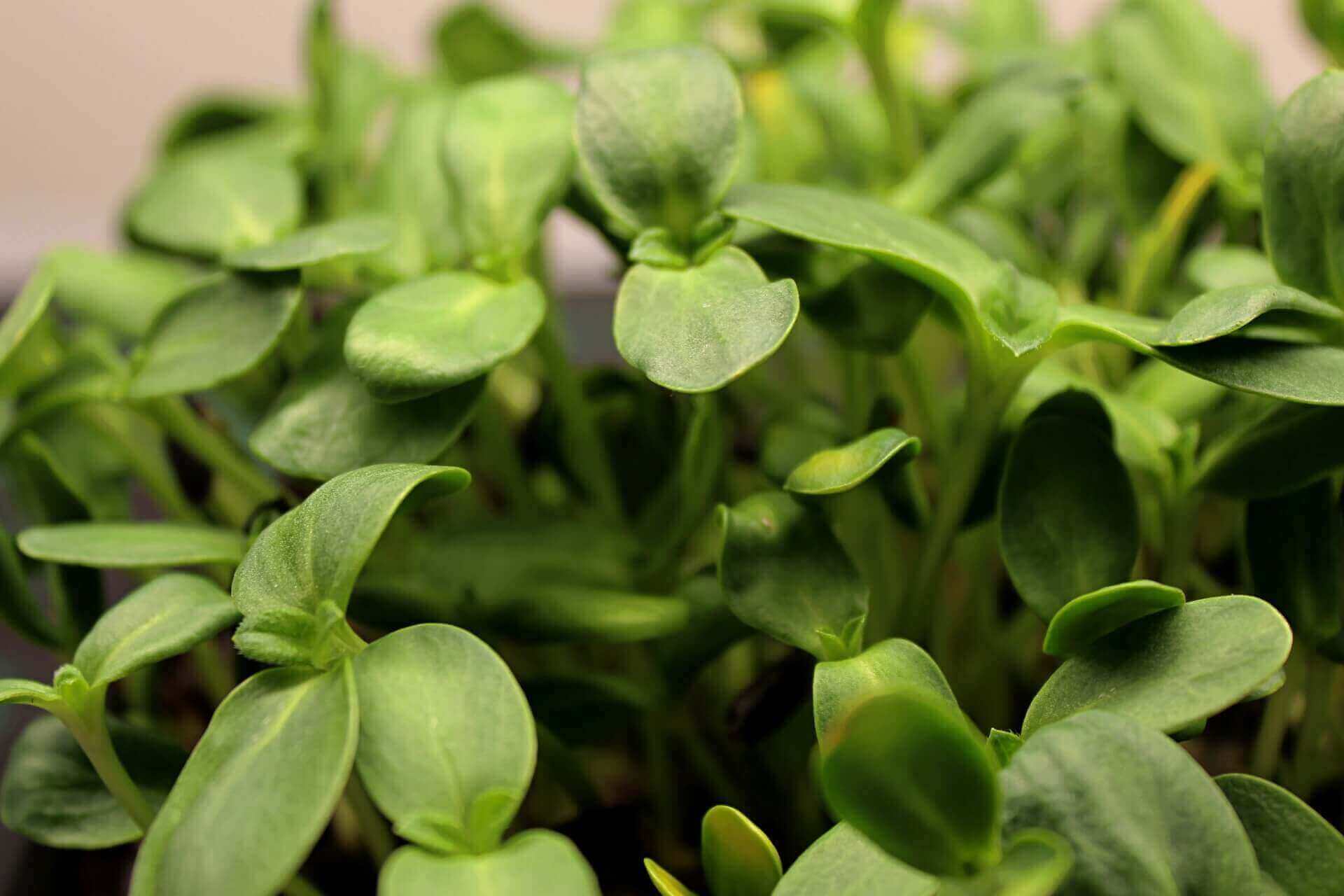 We may earn a small commission from the companies mentioned in this post at no additional cost to you. Not all links are connected to affiliate companies.

First off, there are as many ways to grow sunflowers as there are people that produce them. We have found a lot of the variability, depends on the seed lot. That's just the way it is, and precautions and solutions need to be at the ready when growing sunflowers.

That's why we didn't include sunflowers in our Six Easiest to Grow Microgreens list.

The soft and porous seed shell of sunflowers is the ideal location for fungus spores to attach. For that reason, we recommend treating sunflower seeds with food-grade hydrogen peroxide before soaking or planting.

We don't recommend using peroxide from the drug store as it contains stabilizers to extend the shelf life of the peroxide. For more information on what food-grade hydrogen peroxide is, check out this article.

We recommend pouring 1-teaspoon of 3% food-grade hydrogen peroxide over every 25-grams of sunflower seeds. Pour the peroxide right on the seed and stir the seed around. Let the seeds soak for 5 or 10 minutes, then pour room temperature water over the seeds until they're covered by an inch or so of water.

The hydrogen peroxide will break down into oxygen and water, so there's no need to rinse the seeds before adding the water.

For more information on how to plant sunflower microgreens, and see how the peroxide reacts when added to the seeds, watch the video in How to Grow Sunflower Microgreens at Home.

The purpose of this test is to see if soaking sunflowers seeds for a more extended period before planting will any effect on the sunflowers as they grow.

We treated two sets of sunflower seeds in the same way with a hydrogen peroxide solution and allowed them to soak. 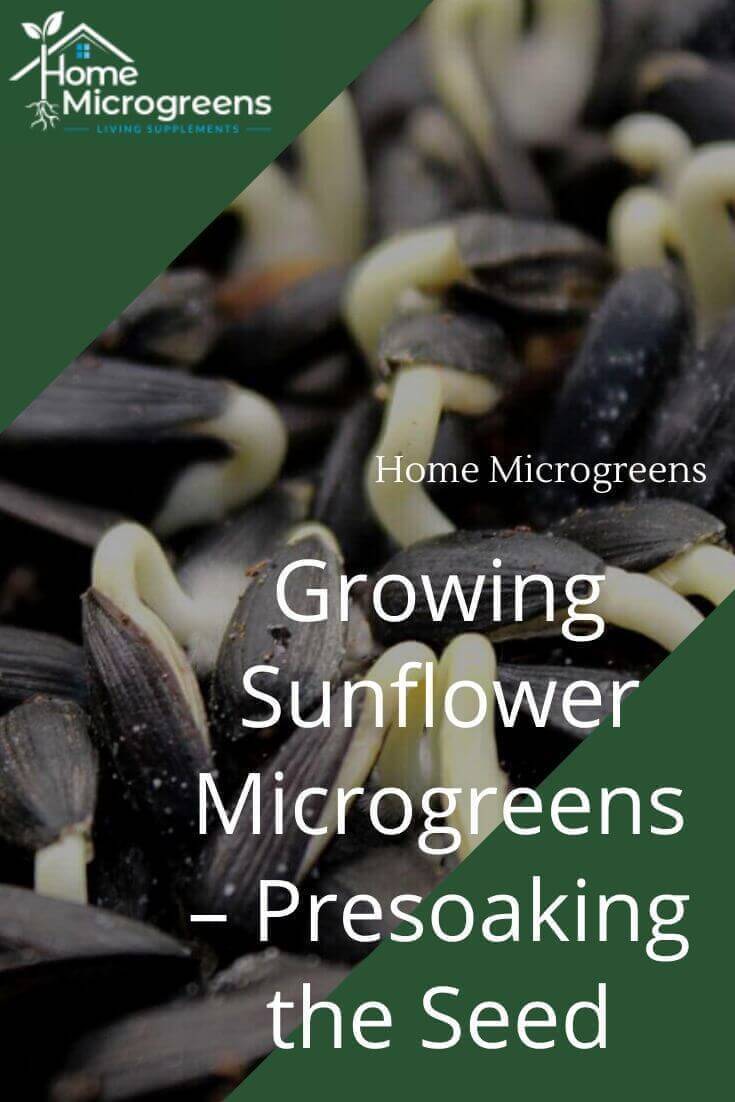 After 12-hours, the first batch of sunflowers is planted and placed in a blackout, including a weight placed on the cover. The second set of seeds continued soaking for 12 more hours before it was planted.

Below is a photo of those seeds. You can see that some of the radicles have started to emerge from the seed. 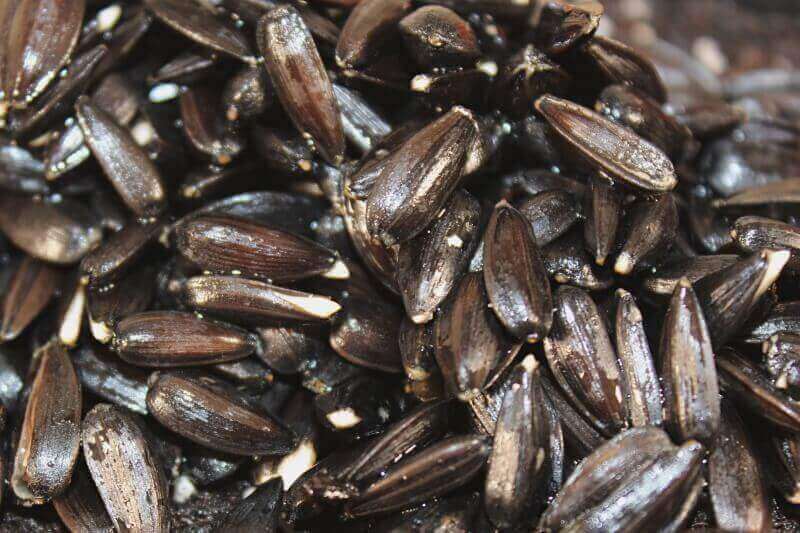 Sunflower microgreen seeds after soaking for 4-hours. Radicles have formed.

Below is a photo of both sunflower trays. The seeds in the tray labeled Sunflowers Tully (the tray was for a microgreen workshop) soaked for 12-hours and have been in blackout for 12-hours with weight on them. Notice how level and flat the seeds are. 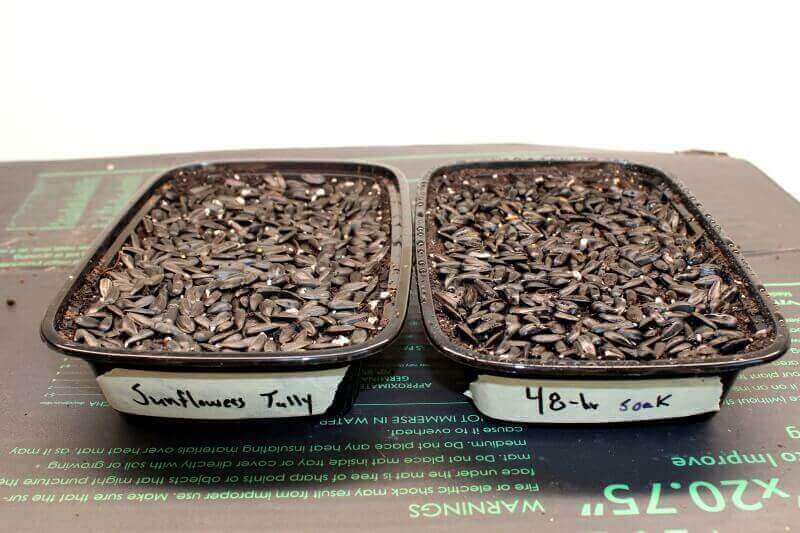 Notice that the first tray planted and removed from the blackout period (left tray) also has germinated and that the radicles have not only formed but are growing down into the soil media.

A close-up is shown below (click any photo to expand the size).

Notice that radicles have also grown on the tray planted after a 12-hour soak.

So, in reality, it doesn't matter how long the seeds soak as long as they're covered and keep moist (as the blackout period does). In fact, we think it's better to plant them earlier as the radicles on the 12-hour soak have already found the soil surface.

The seeds in the 24-hour soak, although maybe sprouted a bit more, are still discombobulated after being planting. They will need to reorient themselves to root into the soil.

As you can see in the next two photos, both trays have similar growth. In fact, the tray planted after only 12-hours might be further along than those soaked for 24-hours. 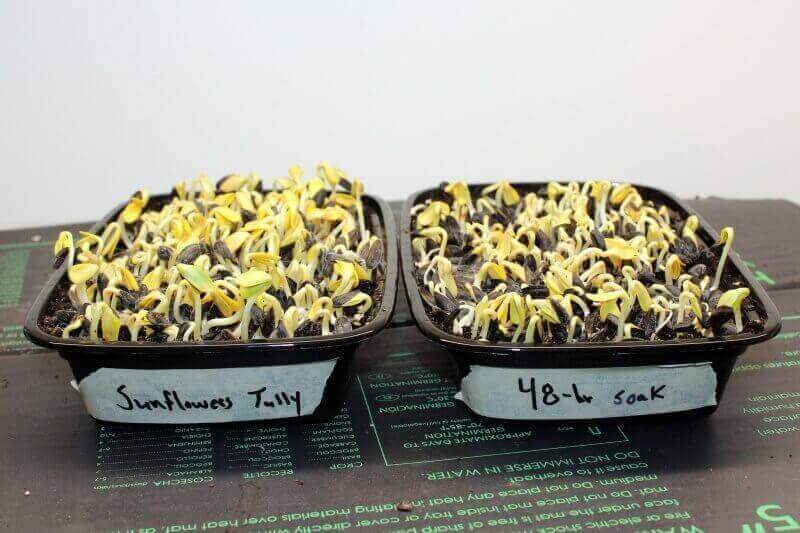 Sunflowers 4-days after the start of soaking. 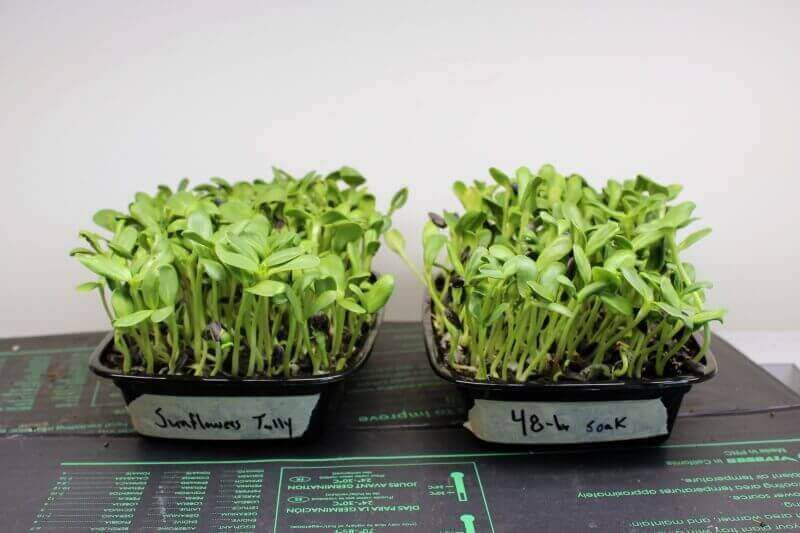 Sunflower microgreens 8-days after they started to soak. The tray on the left soaked 12-hours prior to planting; the right tray was planted after soaking for 24-hours.

Our Thoughts on the Soaking Sunflower Microgreen Seeds

The results of the test show that sunflower seeds soaked for 24-hours may speed up germination. However, seeds soaked for 12-hours planted and placed in blackout also germinate, and the radicles found the planting media quicker than those that soaked for a longer period.

The seeds soaked for 12-hours seem to be further ahead throughout the test.

We see no reason to soak sunflower seeds for longer than 12-hours.

Start growing your sunflower microgreens now! We supply seeds in the perfect quantity for a variety of tray sizes, as well as by the ounce and quarter pound. At very competitive prices. 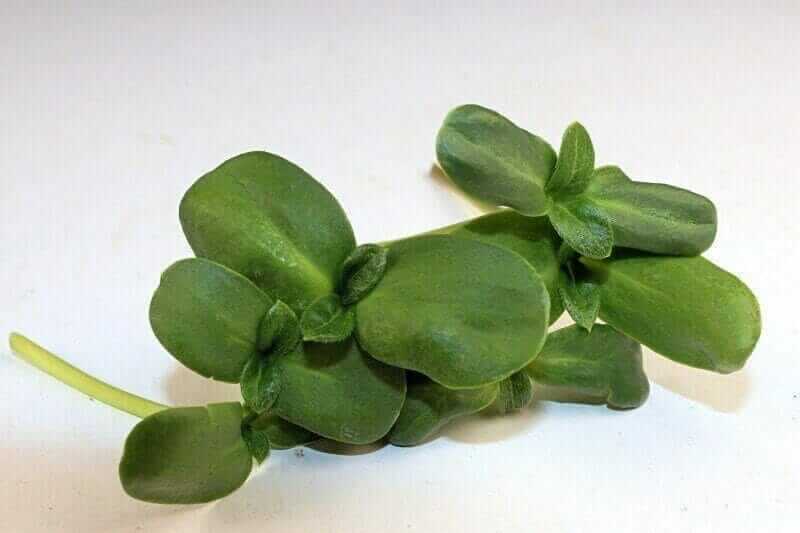 We've planted many trays of sunflower seeds, both untreated and treated with food-grade hydrogen peroxide.

Although some of the untreated seeds grew great, many others ended up with some fungus attacks (see below).

We now pre-treat sunflower seeds with the peroxide every time we plant.

Since we are wetting the seeds with liquid peroxide anyway, we soak the seeds between 6- and 12-hours before we plant them.

It seems to work best for us. Even some of the pre-treated seeds occasionally grow fungus. But a quick spray with a 3% solution of food-grade hydrogen peroxide kills the fungus, and the sunflowers grow great. 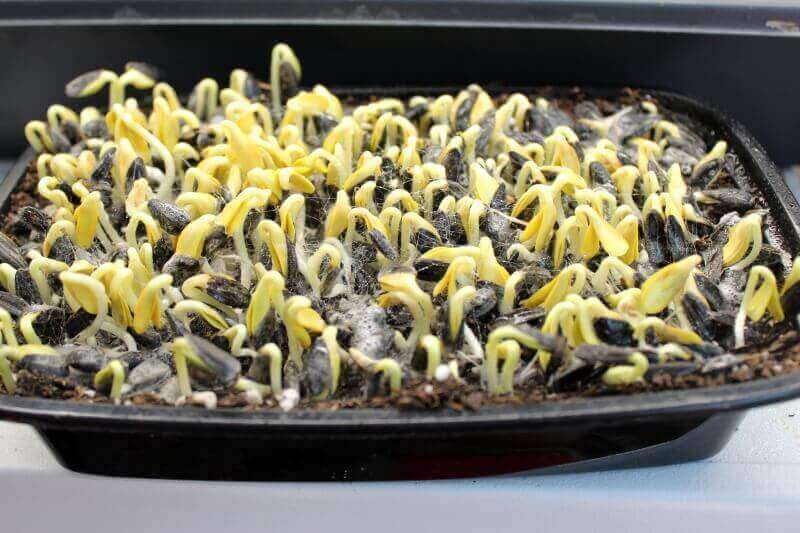 Sunflower seeds not pre-treated with food-grade hydrogen peroxide have a tendency to grow fungus. Even like this, H2O2 can kill the fungus and not harm the sunflowers.

We recommend pre-treating sunflower seeds before planting. Since these seeds will be pre-treated with peroxide and water, they might as well soak for up to 12-hours.

Soaking seeds for a more extended period doesn't appear to speed the process up.

Using food-grade hydrogen peroxide does reduce the chance of fungus growing. If fungus does appear on the seeds, spraying it with hydrogen peroxide will kill the fungus and not harm the plants in the early stage of growth.

We treat sunflower seed with a teaspoon of food-grade hydrogen peroxide per 25-grams of seed. After 5 to 10 minutes we add fresh water to the seeds until the seeds are covered by an inch of water.

After 6- to 8-hours we drain and rinse the seeds and then plant them on a soil media and place them in to a blackout period. If necessary, the seeds can soak for up to 12-hours.

What is your experience with sunflower microgreens? Do you use hydrogen peroxide and soak your seeds?

Microgreen Blackout Period – What Exactly Is It?